Tell me, do you believe in science?

This one in the picture, I called it 'the Little Buddy'. Called - it's gone now. I promised it that I will not say a word about its struggle in public view until it unraveled completely. It rose from the soil, today, I put it back in there. 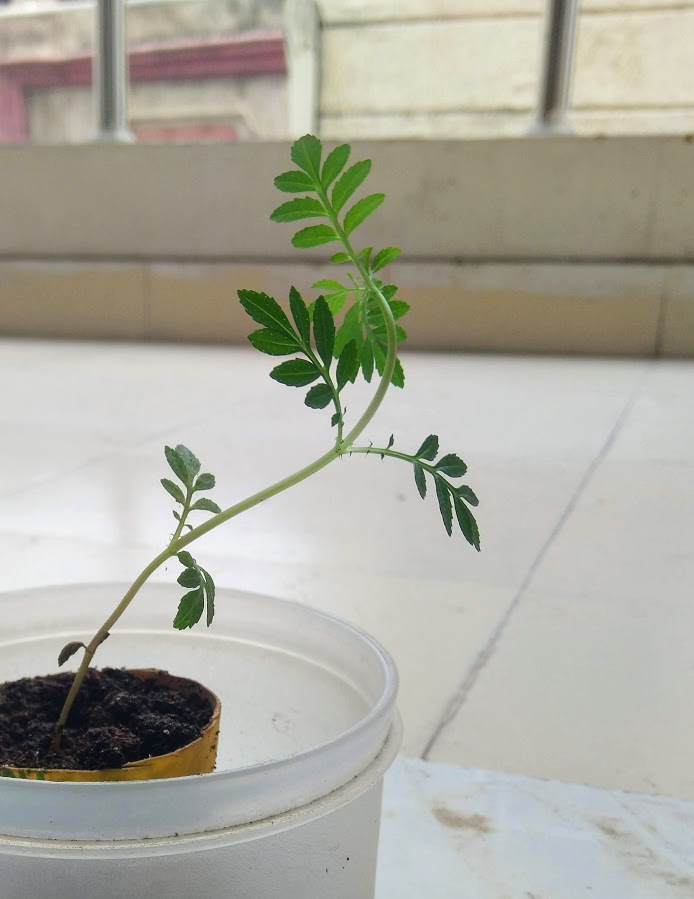 This Little Buddy was the only one of the four or five seeds to sprout from a 'controlled' environment box. Not a thoroughly controlled environment though. A well-meaning friend had taken cues from my previous post about marigolds and suggested that I put a thick layer of soil, place the seeds, and add about a centimeter of soil cover on top. Then, put the cup in a perforated box and water it - to maintain air, moisture, and humidity to allow the seed to grow. I had measured one centimeter exactly with a foot-ruler, and also trimmed the paper cup from the top to make it fit in the lunch box whose cover was to be riddled with holes for perforation.

I had also set up an open environment control subject in a cocopeat pot. When this little guy sprouted, I was elated - it works! I had two major questions then - what's the deal with that environment? Also, what about the other 4? And so I read and also suddenly remembered the class eight biology lesson and experiment on dicotyledons. Seeds don't really need sunlight - they are underground, in the dark! They need warmth, and moisture to activate their growth processes. Seeds are very strange, no, life, waiting in a deep sleep to awaken?

"Perhaps the earth can teach us
as when everything seems dead
and later proves to be alive."

So simple, so elegant, so magical, and so, so forgotten - and I am a student of science or what? Also, some seeds are dead or can't grow - that's why plants make them in plenty. So do humans. One just can't tell which one will take hold. 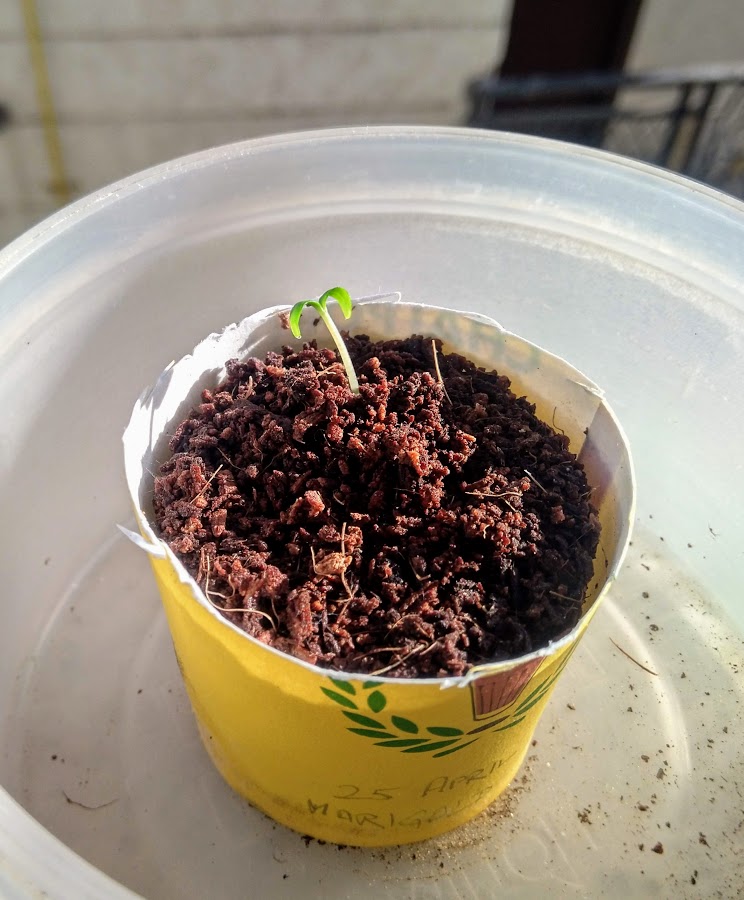 And so the Little Buddy began its overground journey somewhere in the beginning of May. There was an older sibling too - I'm sure you've seen its pictures. I had transferred that to a bigger pot, and it had started to grow majestically. Then, strong winds and heat came; it stood its ground. Then, pigeons also came. Pigeons have no sense of where they are driving their asses into. I wouldn't trust them one bit with chauffering me anywhere. They routinely toppled my smaller pots, the husk pot, and all. They perched on the rim of the pot and pecked the soil. One day, one idiot sat on the plant and bent its stem. I prayed that the damage was minimal. I complained to a friend who childishly said that she'd sent the pigeon. I know the plant tried - I watered it every day, then, twice as the heat grew, but how quickly it emaciated. The innocuous words stuck though - 'I had sent them'. 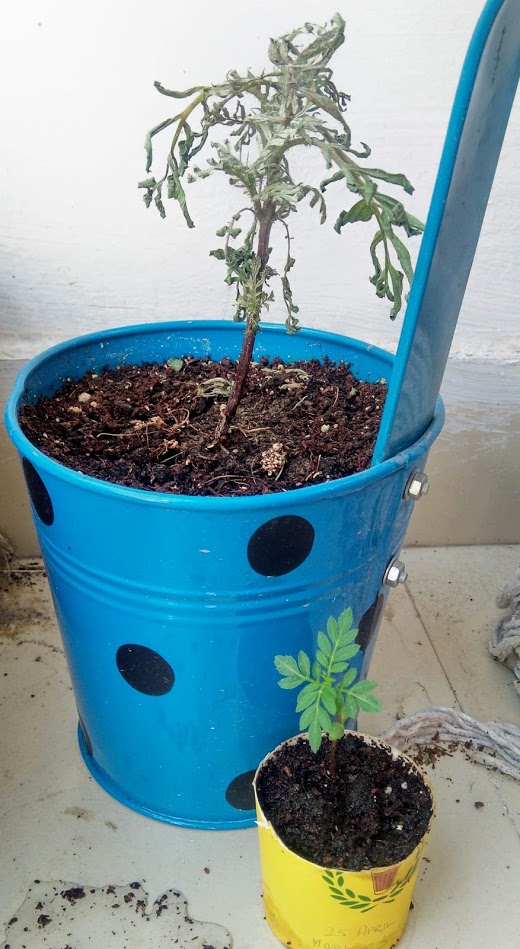 I felt that maybe the wind, the sun, and the heat got it more than the pigeon's butt. So, I kept this Little Buddy in a low shade, hoping that the pigeons would keep away from it among other things. This little buddy was growing slowly. Somewhere in mid-May, I woke up to find that the pigeons or the mynas had toppled the cup, and this little buddy (even smaller back then) had dropped out of its cup with the soil. The last one which I had fondly put back into the cup after realizing that I might have given up on her too early (it was deep, down, and on the edge of the paper cup and I saw it only when I emptied the cup) - I had lovingly told her, "things will not be the same if you go or if you stay. In either case, I will learn to be more patient". If you stay, I'll be patient with you, as you try to grow. If you go, I'll be patient with every new seed as they might also be growing around a kink - like you were. Maybe, had I not disturbed you too soon, you would have survived. She didn't make it. So, this one, I told it that I'll be patient and I will not give up on you. That was a strange day actually, and maybe this accident at the beginning of the day was just a warning shot for some emotional standoff that followed later in the day. Of course, that's coincidental, superstitious, grossly suffers from hindsight bias, but... what if it isn't? What if I just don't understand this language I am being spoken to?

I said to it, 'hey there little buddy, your will to fight is my strength, and I will go all the way with you, for you!' And boy, did it fight! Perhaps, the roots were undisturbed despite the fall. It held its ground. This little buddy too was being ravaged by the heat and the wind. I saw how it's slender stem bent dangerously with every gust. So, I brought it inside thinking "you are probably too young to be out there on your own for now". Its lowest shoots had wilted. The heat had got it. It still fought on though. I watered it and then thought of letting it out in the morning and evening for an hour to get fresh and warm air and the sun. But the winds! I almost quickly brought it back in and placed it on the window pane.

A couple of days later, another clanging fall. This time, it was the cocopeat pot. There was nothing deliberately planted in it since the control experiment, but some weeds had decided to grow anyway. I had been watering them too - they were still tender, slender, and pretty. I was livid and also felt a bit helpless. "पता नहीं किसकी नजर लग जाती है मेरे प्यार को!" साहिर साहब की बात याद आ गई -

The Little Buddy was still hanging on - teetering on the edge of survival. I wasn't exercising as regularly as I used to. But I made this Little Buddy exercise every day. To me, it was a sign of life, a sign of its fight. The morning wind used to bend it, and its roots were still shallow. So, when I brought it inside, I used to align it with its bend away from the light. As the day progressed, it used to bend towards the light. By the end of the day, it used to straighten itself up. We used to do it every day. It made me so happy to see it move with such grace and strength (and a tacit acknowledgment that it was only a matter of time). In some time, a bigger pot arrived, and I transferred it to the bigger pot to give it greater room to grow. But I still protected it from the sun, the wind, the rain, and the pigeons. 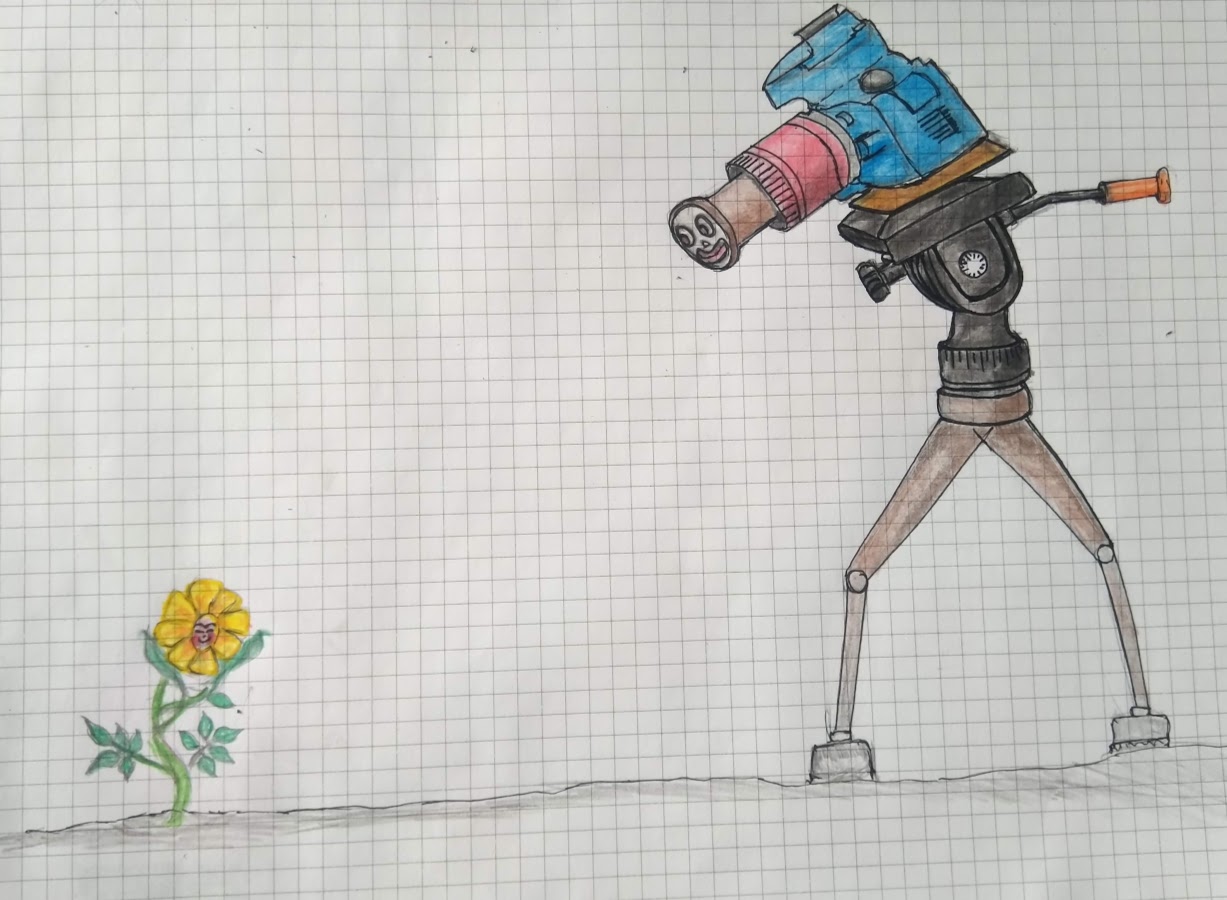 June came, and with it, the lockdown Unlock Phase 1. Second June, I decided to resume regular office, hoping the prudence of the educated crowds and the office management would try to minimize the risk. That was another funny day. A lot of stupid things happened. Salient was that I splattered dal on my shirt during lunch while trying to put it from one compartment to another in the thali with a shallow wooden spoon. When I reached back home, I got a bit stuck when unmounting the bicycle and the cycle fell with the handlebar turned around. No hurt, no touchdown, but I had realized that I was going to fall. The cycle seemed okay, it was a soft landing. We'll know.

When I closed the balcony door, the pot carrying the Little Buddy fell over the window sill from the mere force of the door closing! The plant was buried in soil on the floor as if someone had thrown a nest and its hatchlings mercilessly to the ground. My heart went a bit numb. I collected the soil and the plant and tried to put them back as they were before. It felt like 'now' it was all over. I knew things would end but in this way? No! That's cheating!! I did wonder 'आज हो क्या रहा है'. Didn't take the cue though, to repartee. Later in the evening, I upset one of my parents over a stupid non-issue.

It was indeed over, but it tried still. The bend never recovered, the leaves which were green now became checkered with whitish spots, no new leaves sprouted. I still watered it. It still moved to the best of its ability to align its leaves towards the sun. Until it couldn't anymore.

Thus Nature spake—The work was done—
How soon my Lucy's race was run!
She died, and left to me
This heath, this calm and quiet scene;
~ William Wordsworth

Today, I buried it in the same pot. I won't stop, one way or the other. But, I have this refrain now, of not telling a beautiful episode as it unfolds - but to first live it fully, and only open it to others after its closure - in whatever form. Perhaps, it is just the uncertainty principle, that things change when we bring them to light - all kinds of things, good or bad. Perhaps, Gibran was right, "Travel and tell no one, live a true love story and tell no one, live happily and tell no one, people ruin beautiful things." The innocuous words stayed.

Tell me, do you believe in signs?