Everything is a chemical!

Some casual dinner comments give rise to great discoveries. For example, John Nash thought upon his theory of non-cooperative games and the equilibrium theory while he and his friends on a lunch table discussed the ways they could get the blonde girl (As per the movie ‘A beautiful mind’).

While we haven’t come across something as enlightening as that so far, but our discussions often result in heated arguments about the validity of a theory or a notion that one of us has held, and is found debatable.

One evening, when our maid did not show up, we decided to order food for dinner from a nearby food joint. According to consensus, it was well deserved for we had cooked in the afternoon. It is customary to have desserts as well when ordering food from outside, and the room-mate ordering food was directed to order desserts for everyone.

This guy being extremely health conscious. Knowing the craft of the trade since he has family businesses in make sweets sprawled across the region, he doesn’t trust anyone to make pure sweets, with the exception of ‘flour laddoos’. So, while we were relishing hot ‘Gulab Jamuns’ and he having his delicious laddoos, he observed that his laddoos had more ‘sooji’ than ‘flour’. “Yet”, he said, “they are essentially derived from the same raw material and it is just the granularity that matters; so they are pure, while the ‘gulaab jamuns’ can be made out of chemicals”. 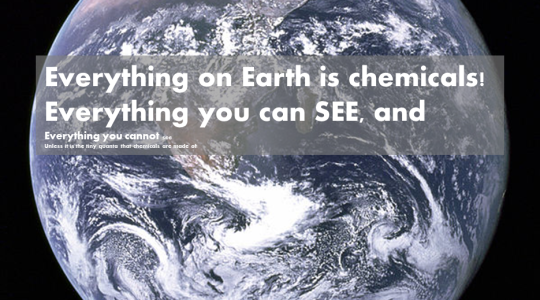 (Image Credits: Chemicals are your friends)

Even though we have Google for finding all answers now, it is laziness that still holds the promise of inventing new ideas. Because we were eating and we are lazy, no one moved a finger off their desserts. Everyone argued and we started to disgorge all jargon we had gobbled up until senior secondary and beyond. He vehemently defended his claim that a chemical must have a chemical formula and when we said that everything has one, he challenged to find one for wheat (since laddoos are made of wheat flour). Ultimately, we did google it up hastily (after washing hands of course), and the first result, from Ask.com said “The chemical formula for wheat flour is (C6H10O5)n. Wheat flour is also known as wheat starch. It is available in white odorless power and is commonly used as in ingredient in baking.” Triumphantly, I read it out loud.

But he was adamant and said wheat contains many things, it is constituted by many things, but we cannot call that a chemical formula. I argued that we can, even a sum of all chemical formulas, according to me qualified as a valid chemical formula. He search next and found on Yahoo answers that “It is not a chemical, it is a mixture of chemicals. There is no formula.” It was his turn to get snooty. Dismissing his answer from Yahoo answers as a poor reference (while internally making the same conclusion about our own reference, About.com) I searched again. This time, I found a link to a government site which gave a table of composition giving its chemical composition in grams per 100 grams of wheat, with references. He argued that it is composition and not chemical formula, it is not a single structure.

The time for founded theories was over, and we were arguing in the realms of pseudo-science. I said, “Agreed that these are all composition but all these compounds are held together and that is through some kind of chemical reaction and bonding. Even cohesion and adhesion are chemical reactions, temporary though”. I claimed that even mixing of flour with water is a chemical reaction. He rubbished that argument and I contended that if it weren’t so, could he please separate flour from water now (That by far was the best logical argument I had made, I surprised myself :P). He did not answer this, but still persisted that this doesn’t necessarily imply on wheat and is not enough for it to qualify as a chemical. It was a three to one match with me and two of my friends arguing in favour and him against it. The discussion encompassed amino acids as being the basic compounds and DNA and all having a chemical formula.

He gave a new argument, that wheat is not a consistent thing, it varies from place to place, in shape structure and size. We agreed that it did, and he said that if that were the case, we cannot have a particular form of wheat. (Touché! That is actually a valid argument, but because we hate to lose, we carried on this massacre). I countered that if that were so, the doctors would have to specifically tell you what kind of wheat one should eat rather than just recommending wheat. (They recommend it because of the certain dietary contents that are its essential part and not because of the carbon rings or nitrogen content percentage; I mean it boils down to that, in a very crooked and empirical manner, but even they don’t know it ;-)) Another argument was the carbon exhibiting different structural forms as coal, graphite and diamond, even when it does have the same chemical composition and formula.

But because by now the dinner was over, we let the topic stay as it is and went about our own businesses. I came back to my room and evaluated the arguments dispassionately. I looked into the structure of the wheat grain and found that it is like us, a cellular ensemble of many compounds. I conceded that he was right that we cannot have a single formula for entire wheat flour, because wheat is also a living thing with different parts and each part having a different molecular makeup. Later, he came back with a bang and said the same thing. So, I conceded that argument to him. In turn, he conceded that his first premise, that everything cannot be a chemical, was wrong. So, wheat is a mixture of chemicals, it is a chemical but doesn’t have a chemical formula (it is variable proportions of each compound everywhere). He went back happy when I conceded that I was wrong in claiming that wheat will have a chemical formula and I am just happy that this made me document it.

Life is interesting if you look at it, but these events often go unregistered. Life, is a million little things.

P.S. : Make commenting easy for yourself by logging in via Google or FB. The top sidebar holds the login buttons. Thank you :)