Everybody likes a good fight. 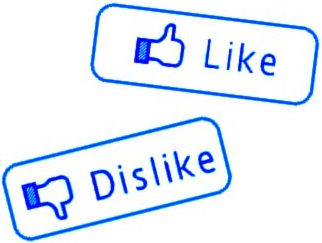 It is ironic that we can only 'like' stories on Facebook, even when they are heart wrenchingly sad and we've nothing (consoling, or profound) to say.
That 'like' is a juxtaposition which makes me wonder what the person meant by it. Did they like the story as if enjoying it, or they liked the fact that the other person (the one who shared it, or wrote it) shared it with them, that sad story, or good story, or perhaps, a happy story. In any case, one cannot know for sure.
The dislike button wouldn't do justice here, and since social networking is meant to *not* spread loathing or hatred if it cannot spread warmth and happiness, removing the dislike button was a very wise move on FB's part (a very old story). But it does leave us - 'too lazy to type a word or draw an emoticon' - dissatisfied somewhere, and also creates a sense of disillusionment due to this ambiguity in deciphering the intention of the reader. Afterall, nobody likes to fight, but everybody enjoys a good fight.
Of course, there are people who mint 'likes' by sharing such stories and they are least bothered by the intentions as long as their ends of being liked or talked about (being popular) are met, but the reader cannot possibly discern from a single read, the ulterior motives of the creator. This is paradoxical in a sense, like being a dog who is barking at his image in the mirror, which appears to be barking back at him. A distant (and mindless one, I might add) observer, another dog perhaps, would wonder if the dog is barking at the image because the image barked at him, or is the image barking at the dog because the dog barked at it. What triggered the tumult? We cannot know until we know how it works. It is like chasing tails and falling flat.
It is really confounding, and yet, deeply intriguing and interesting. Maybe it does not matter in the end if everybody is having a good time out of it, or even deriving pleasure out of it since we all are here to have a good time; but knowing for sure what it meant to the author is a different ball game altogether which moves the world forward with truth and away from delusion.

(P.S.:) Having written a longer than expected thought in my 'Update Status' text box, I am sitting here trying to decide if it is fit enough to be a blog post, or just an FB page update would suffice. Contemplative Rationality has the side effect of taking a lot of time in the process of arriving at a conclusion, and owing to this latency, the entire idea doesn't fit well in the real life situations. (This is where the P.S. should have ended).

Today, while haggling fares with the Delhi autowallahs in the morning to get to office, I made an impulsive decision, which I soon realized was essentially wrong. There were two rickshaw drivers chatting by one of their rickshaws when I accosted them to inquire if they'd take me to office. Yes, in some parts of Delhi, we need to ask them if they feel like going to places; they fling the obligation to do as asked out of their rickshaw as casually as people throwing banana peels out of the back seats. One of them negotiated, we settled on the price and he showed me his rickshaw and the moment we started to move, the other one claimed that we should go with him since he's carried us before too, and we were his regular customers. Honestly, I had not registered his presence when I inquired, and only after he called out did I see his faintly familiar face. I chose that Autorickshaw out of prejudice because I did not think about it. I listened to an emotional appeal, and responded emotionally in turn, and that, was wrong. The other driver complained, but we were seated already (and it was getting late too, for the sake of argument). This person next told me to never ask him again for taking me anywhere, he might have felt offended. The rickshaw moved forward but his words had registered. I admitted to my companion that I made a mistake in having haggled with one and then choosing another which in strict terms of give and take, was a wrong thing to do.

Damage Analysis. I don't know if not taking me to office any other day would cause any business loss for the complaining driver since what is one customer, a trifle income source? Marginal loss, which might well be compensated by a long distance traveler coming after me, or, on the contrary, a shorter distance traveler, thereby incurring losses. Will I ask him again? I have the right to feel offended in my place (as he did, in his), since I am customer and his source of income. In fact, I might not ask him again, ever, if I can remember his face or look at each autowallah's face before asking for a ride. I usually don't care who's taking me to office as long as someone is, I don't look for familiar faces first. Will his not taking me affect me? Maybe on some fateful day when there are no autorickshaws to hire with him being the lone person there, and he decides to not oblige, I might be at loss. But that won't be the only day when I am late to office? I get late for sillier reasons: Did not wake up on time (since I stopped using an alarm clock), sat too long attending to nature's call, (that is one place where the clock fits but is never installed), was hooked on to solving the level-5 Sudoku in the newspaper (that is the only thing I open the newspaper for, start from the back, Sudoku is on the second or third last page), forgot my I-Card and had to march back home after having covered half the distance or there was just too much traffic, or the auto rickshaw driver got into a verbal battle for five good minutes with another fellow passenger who was supposed to be dropped at the metro station but was let off at the opposite side of the square because my office is on the left side (and left turn is free) and the 150 seconds red light is on (while it takes 120 to climb up the overhead bridge and cross over). Conclusion. Does it matter? Can't say, so lets take the benefit of doubt, it doesn't matter. Lesson learnt, I need to be more aware of my surroundings and the actions I am engaging in if I am to take better (rational) decisions rather than emoting to emotional pleas.

P.S.: Besides, I too am here to have a good time, and as long as I remember it, everything is fine. And I think that THIS thought (in the P.S.) has a lifetime more than that of a FB post or a tweet.