Glamming up the glamorous

I still remember the time when cricket used to be a much followed sport in my family. We'd be given special allowance to watch the match even if the face of impending final examinations at school, only if we did not linger around the television set throughout the day and prepared for the exams in earnest. By the time the teams were tossing coins, Ma and Papa would be tossing questions at us in order to decide if our level of preparedness was fit enough to survive the match; match fixing was quite unheard of then. Even if we were found lacking, we were not deprived of the slog overs or if the match took an interesting turn. Murphy doing best what Murphy does, the matches turned out to be thrillers every time we were under-prepared. Later, I realized that it wasn't their pitying us which melted their hearts to let little, naive kids enjoy their childhood by watching the match, but the running commentary that accompanied each ball. The commentators followed every ball and described every movement on the field with poemish lucidity. No wonder they knew that course books would be the last place we'd be looking at when the raucous blaring of the commentator's microphone announced the account of each breath on the field. They knew we were keeping scores. Perhaps it is because I heard each players name so often that I was able to play nine wicket matches with brother on our terrace when he always chose India and I hopped teams and had the roosters ready for each line up. Sadly, I don't remember our home teams line up properly nowadays.

Ah, that was the time of foolishness indeed. How much we prayed, that Sachin made a ton when he crossed over the seventy's mark. Some one would go into the prayer room and perhaps, bribe the Gods to protect the team, or send Inzamam-ul-Haq aka 'aaloo' back to pavillion. Incidentally, the Lord never listened to our prayers, except Mum's who boasted that God always listens to those who never lie, a notion which slowly, but steadily took hold. Looking back, I realize that it was a pretty neat trick. When you fail, don't tell anybody, as a result, the reputation only stacks up. Even when we were at our Grandpa's place plowing the lands (as kids we were required to pick off weeds from the trail of the plow, or throw out pebbles so the soil may be fine and fertile), or watching over the cows in the green pastures, the commentary over the radio kept us company. I still remember the time when Anil Kumble made the 10 wicket haul, the commentators were wild with enthusiasm and so was the entire place, thanks to the commentators. Those were clean days. 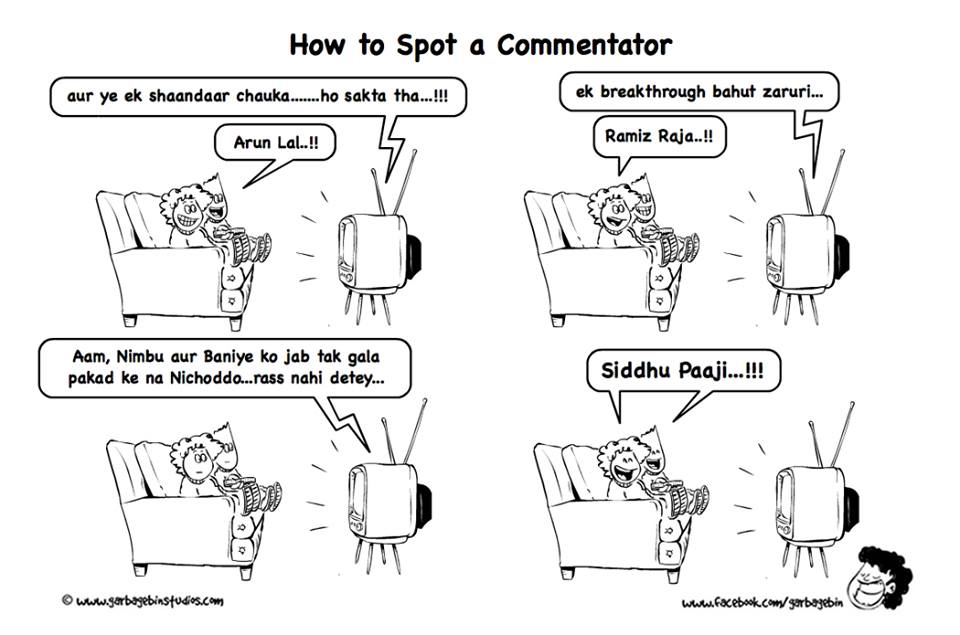 The reminiscing is imperative since the tables have turned long since then. Hearing the modern commentary is seldom an enjoyment of the game now. The commentators seem to be wandering off, discussing the local cuisines, or comparing batsmen, or evaluating curriculum vitae of the batsmen, bowlers or fielders, profiling the cheerleaders (a few Indian commentators have been spicing it all up) and occasionally mentioning something about the match. The match analysis has been comfortably moved out of the match hours, into extra hours, sports extras and other autopsy reports where old statistics and new data are mashed against each other and player performances are dissected under a microscope. Who watches them? The enthusiasts do, a group I no longer relate with. Perhaps bookies do too, in the game of chances, we all want to maximize the odds in our favour. Wasn't this a commentators job in the first place, when did their role change? It's like the umpires not acting as, well, umpires, but as tourists who're out there to sunbathe, leaving the job of umpiring to the third eye, technology. The bowler appeals, "Howzatt!" or "how was that?" and the umpire shrugs, "it was pretty good" rather than deciding the outcome.

The sport is getting a lot of business attention and I suspect, dwindling common-mans attention. The game is getting fast paced and bursty, and so are the careers of players. (In my defense, this is one reason why I don't remember our teams line-up, they change too often). A whole new breed of data analysts have sprung up and the sport is catching up with the hot and happening terms like big data and stuff. Not that applying analytics to sport is something unheard of, the basketball teams and football clubs do it all the time. The problem is, the clubs do all this rummaging behind closed doors and base their decisions on it, like any responsible business or customer does. What trickles out is an occasional rumour, and that keeps the fun alive.

Yes, the proliferation of newer game formats has opened up a plethora of vocational avenues for a myriad of businesses, but does that make the game more fun? I guess not. It tires players out. It's no longer a sport, it is a fast paced profession, where you've to earn enough in about 5 to 15 years of your lifetime for the rest of your life. It is somewhat analogous to old age military, where soldiers must train each day, physically, only that battles did not break out that often back then as frequently the titans clash today. But lets not deflect from our topic of commentaries which have come to contain more chicanery than substance. I mention 'chicanery' primarily because it has a 'chick' in it, and the cameras always doze of to one (ground of ) good looking female(s) and the commentators never fail to acknowledge the ladies. For me, twitter brings me to the television to see the face who is trending over twitter while the match is on.

The mere mention of Twitter makes me think of this new breed of sport enthusiasts. A couple of friends do exquisite commentary, mixed with sharp wit and strong words, only on twitter. They make me wonder if they're watching the match with their heads straight or always peering into their twitter feeds. They are so trustworthy that whenever a commentator raises his voice in excitement, rather than heading over to the nearby computer screen, I refresh my twitter feed. Such is twitter, and so good is an impromptu remark of exasperation. Nevertheless, as long as I have a decent replacement of the muse, I'm okay with it. I can do without watching a movie too if someone can narrate that story to me.