One thing leads to another if we talk a lot.

This post is almost a faithful translation of the previous post "Talk lost when let loose" which was written in Hindi.

There is a certain thing about talking, that one thing leads to another. I am reticent at best, but when it comes to dialectical discourses based on personal opinion or general logic, I am an incessant talker. And I am stubborn (bad). At such moments, I often get into thinking “What a fine co-incidence that I had introspected about the very same thing a few days back. Let’s try to find out what others think.” The terrible fluidity of self-revelation shines on me when words fail me. What was terse and dense when in my head suddenly explodes into essays, digressions and vain, faltering words. The deftness with which the committee in my head accepts or rejects these thoughts is mind boggling, my words can barely keep up to even hint at a faithful representation of the idea. Self-doubt creeps in that I’ve taken too long, I’ve talked too much, that I haven’t given the other person a chance to speak. There is, however, a little solace in hearing them talk back, and a certain joy when they respond, even if it is to refute.

An office colleague and friend visited us a few days back by the evening. I was listening to the music and pranks that RJs on Radio Mirchi channel played on their listeners. I think I was also writing something, perhaps I had just finished writing an article. He asked, why do I write so much, and how? Answering this question conclusively is, by far, one of the most difficult things to do. Why do I write? My reasons keep on changing. If I set out to explain the progression and reasons for those changes, many skeleton will spring forth from my closets.

Unsure, I responded – “I write to forget, to let go. I stash my thoughts on blank papers in ink, so that I can think about new ideas. I write them so that they aren’t lost on me, that I have a record of my thoughts.” It behoved me to clarify that it isn’t the only reason why I write. “Sometimes, I write for the sake of writing, so that I am in the process of writing, that I don’t fall out of it.”

My pal caught me by tenterhooks on this response and asked “Do all writers write like this? Sometimes for the sake of writing?” Now that we were departing from a personal account into a generalization, I opined “I can’t say why they write, or wrote, but I believe that all of them must have gone through phases when they didn’t have anything to write about, or did not feel like writing, but lugged on with it just to prevent rust from setting in. They were pushing the cogs of the wheel. I think that the ones whom we call ‘great artists’ today, not all of their creations are praiseworthy”. He replied, and I think it is really a gem of a statement that “The writings make a writer then, and it is not the other way round.” In many senses it is true. But that the writings were made by the writer, is just as true; not all the writings made him famous, too is true. It is in our fault that we idolize each of their creation later, owing to their brand value. Probably, that is the difference between an educated critic and an ordinary man in this sense of perceiving art (notwithstanding the ignoramuses). For instance, take A. R. Rahman. Currently, his music is at the acme of popularity. He seems to have the Midas touch, whatever he touches tends to become gold. But some people, and a few diehard fans, or fanatics of sort, tend to idolize each of his creations, even when they aren’t so good. Now it is my personal opinion, and I am no connoisseur of music – I am but bound to my senses and desires, I do what I like, I hear what pleases me – but the female version of his song ‘Patakha Guddi’ by the Noorani sisters has more soul to it, more character to it, more freedom, more energy that could move many leaden feet. However, the male version of the same falls flat on most of these features, according to me. His voice is soft, and no matter how much oomph and gusto he lends to it, it doesn’t match up to the folk-like voice of the female counterparts. On the other hand, there’s Honey Singh; many people consider his songs as derogatory - abasing and objectifying women, even though I know more female fans who love and hum his songs than males. But if you still take those offensive words out of the songs for a while, you cannot help but be swayed by the tempo and the flush. Now many people would be offended at me for having compared a titan with a human (I need a more apt metaphor here), but I solemnly believe that comparison of art is wrong, and yet it cannot be helped. You can fuss about roses having thorns, or can appreciate the beauty of a beautiful rose growing out of a thorny stem.

The friend also narrated a small story in response to this, but I’ll let the story be for some other time – its moral was ‘writing happens, when writing happens’. Then he told me that he always wanted to write, especially satire, but having made one failed attempt at it (where he judged himself rather than others do it for him), he did not try again. I taunted him that he’ll never know until he makes it real. “Nothing acts except what is actual”, was the phrase I was searching for, but did not find. I just showed him this pic, 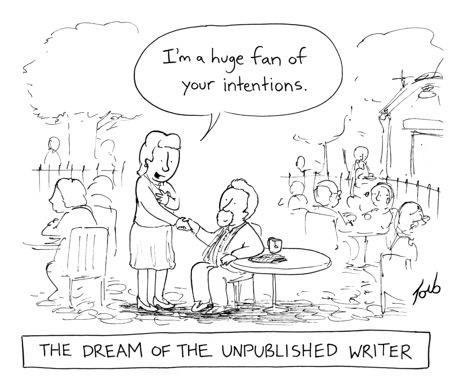 “If you want to really hurt your parents, and you don't have the nerve to be gay, the least you can do is go into the arts. I'm not kidding. The arts are not a way to make a living. They are a very human way of making life more bearable. Practicing an art, no matter how well or badly, is a way to make your soul grow, for heaven's sake. Sing in the shower. Dance to the radio. Tell stories. Write a poem to a friend, even a lousy poem. Do it as well as you possibly can. You will get an enormous reward. You will have created something.”

The discussion then drifted to forms of writing, particularly the distinction between satire, sarcasm and humour, and the current scene on global platforms with the emerging breed of stand-up comedians.

The night was passing and the ‘shaahi paneer’ in my plate was losing heat each passing moment. Just when I was about to put the first morsel in my mouth, the friend demanded to have a piece of cheese. I hesitated a little (because it was cheese) but then I put that morsel into his mouth. The way he craned himself to take that bite from my hand, I was reminded of an analogy and could not help but laugh out. He inquired and I thought that when we were already talking about the forms of language, let me apprise him of another form of situations expressed in writing through this practical joke - irony.

I told him “You know, it is a tradition in our house that the first morsel from our plate is fed to dogs.”

He managed to laugh –at the irony of his situation - (and gobble up a few more pieces of cheese).