The joke is on Me.

There was a pun-joke I came across a couple of days back. I got it today!

You know you are a mess when you suddenly start to forget simple things, like the name of the instructor. What was it? I am sure I knew it just a moment ago! Darn! I look at the Professor and think, what name does he look like? What am I going to write in the feedback form?

And then, just like a person with some wicked sense of humour, my brain slips in the name quietly, as if nothing happened. Of course, he looks like a human. He is one! Manav. His name is Manav. 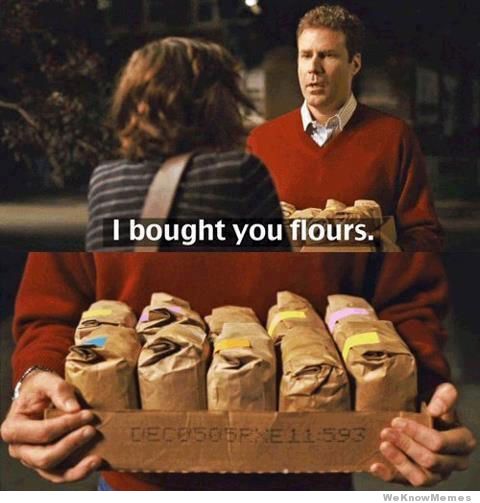 And just like that, my mind starts to unfold card after card as I put morsels of food in my mouth and start to churn them. Around 3 or 4 days before, there was this joke floating around on the twitter feed and everybody seemed to get it. 'I bought you flours'. I got it today! Now, blame it on wrong pronunciation, I thought, why would he buy her 'floors'? It dawned on me today (and ironically, it is night) that the word might be pronounced as 'flowers' and not 'floors'!

A few hours back, I was talking to my room mate and kept on forgetting the name of a technique that is used in WiFi. It was something with D, or maybe it was ACF. But ACF sounds like Auto-Correlation Function, it wasn't ACF. Now, while eating food, I know. It is 'Distributed Coordinated Function', a technique used to combat the 'hidden node problem' which is like you want to talk to the girl you like, but you don't know if she's talking to someone else (hidden node for you) in the meanwhile.

A few months back, I had suddenly forgotten my Debit card PIN code. Just a 4 digit sequence. On other days, there is a little trick that used to work in case the number slipped my mind: there is some kind of muscle memory in fingers that you just happen to punch in the right keys on the terminal. I relied on this muscle memory for tough times like that baleful day. But this particular day, I had to go back empty-handed, without money. It was two days later, while having lunch that my mind slipped in a chit, 'Hey, was it THIS?'. Well played mind, well played!

I'm not keeping score, we're on the same team. If I blow up, hey brain! you will just have hoisted yourself with your own petard!