He was barely 10. The little diver took his last plunge into Yamuna on October 4th, and never emerged. People are still sharing his photographs on social media, appealing others to report if someone finds the missing boy. They say his mother is worried. The post has been shared 5981 times so far, and on average each share has 50 likes.

His mother isn't worried anymore. She's just sad. A little manic too. His body was found ensnared in the dissolving skeletons of a Durga Puja idol, ironically.

He must have been scavenging for valuables and some coins that accompany the Goddess in her submersion after the ebullient devotees bid the Goddess farewell and left until next time. Goddess needs money for the boat ride, you know. So do poor people. 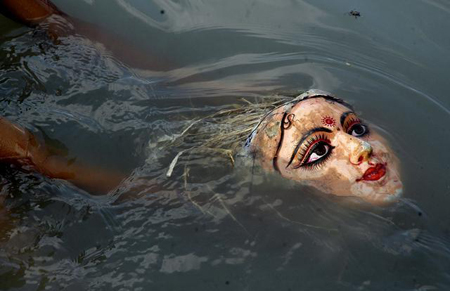 The local Pundit consoled his mother by telling that Ma Durga took him with her to her abode, he was truly blessed. His mother couldn't agree more. What else could she do? Expound on the existence of heaven when she knows little of it? He must be in peace now, what else must be believed. He is now, resting in peace.

But the post is a hit, by the way. People are still searching for the boy on social media.