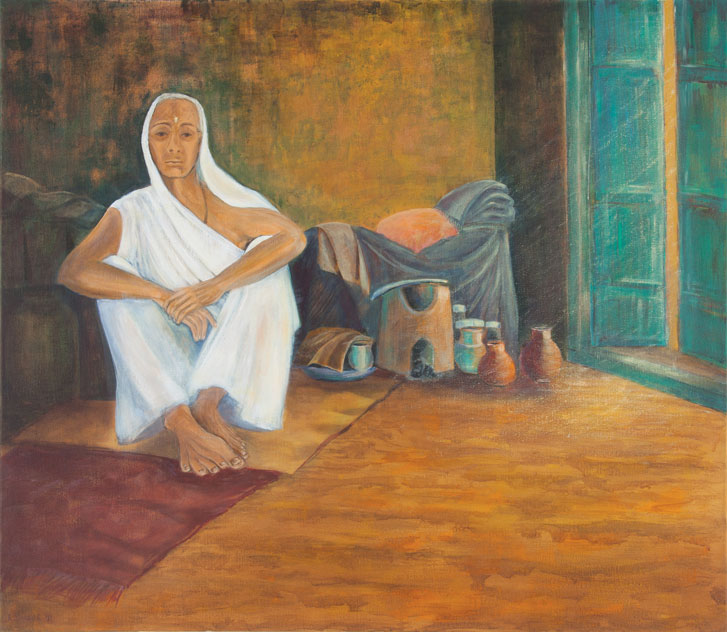 That night, after a lot of commotion, men had started to return to their homes and hookahs. They talked in high spirits of how he ran like a rat, that little piece of ‘uncouth bastard’ who had tried to profane the sanctity of their pious village and its one particular denizen. The culprit had escaped on his motorcycle before they could have nabbed him and probably interrogated him; though listening to what they had to say, it was hard to believe that the entire gentry of village men armed with sticks and sickles had assembled in haste for bandying words. ‘Bad influence on the children’, ‘casting lustful eyes on their women’, ‘protecting the heritage’, ‘fighting for righteousness’, ‘infidelity’ were the keywords they mouthed, some with a tinge of alcohol in their tipsy tones.

That one dim light of that lonely house now stood forlorn, but relieved. The woman had not moved from the entrance of her room where she squatted with her head rested on her folded knees. The fire in the kitchen had long went out, with only coal wrapped in ashes as a namesake for warmth. She just sat there stoically, looking beyond but seeing nothing. Somewhere inside the room, her ‘dupatta’ hung randomly by the cot.

Her life had been one ride. They were farmers once, had three cows and two oxen. They made their living by selling seasonal vegetables they planted in their modest fields, and by selling milk in the nearby town. Her husband would head out to the town early in the morning with vegetables they’d culled and cleaned for the markets. She’d milk the cows by the time he returned, and then he’d head out for his second round, delivering milk at door steps of many houses in the town. Many families often complained of the thinness of milk, or that the milk not having cream, but he always found new customers somehow. She’d ready their three children and send them off to the nearby primary school, two girls and one - the youngest – boy, and go about the daily household chores. Some days, her husband would return sober and lay on the cot for an afternoon siesta, or go and chop some green branches to feed cattle. Other days, he’d be found sleeping on parapets near the liquor stall nearby, or under some tree, or sometimes, by the roadside. He was an alcoholic, and sometimes when he got drunk at home, he’d hit her. Otherwise, in every sense, her husband was an industrious man, and quite social and amiable. She didn’t mind him drinking outside and returning home half-drunk than getting bruised. Some village acquaintance would intimate her of his whereabouts and she had once even tried to bring him home, inebriated. She never tried again. Perhaps, she thought it was wise to not make their internal matters public, though there isn’t much to privacy when houses are built back to back and share common walls and verandahs. Evenings, the two and their children would work in the fields, preparing for the next day. They barely broke even, with half of his earnings - their earning - serving his other wife, alcohol. Soon after their eldest daughter’s marriage, at about 17, when the other one was about 13, and the youngest son about 7, her husband’s health started to deteriorate. He was diagnosed of liver failure and was hospitalized several times. With little money and even little hopes and without a functioning liver, he died of stomach ache one night.

It’s hard to say that heavens crashed on her following his demise. It barely made a difference. It’s just that her fields now barely supported them since she couldn’t take care of them. She sold the pair of oxen as she couldn’t till the land with them, the best they could help was with some money. Selling milk barely sustained them, so she also went about working as daily wagers in other’s fields and little housekeeping jobs. Her unmarried daughter took care of the house and her brother. Villagers sympathized in words, helped a little, like someone would till their lands, or if something grew, took it to the market for her. But nothing more than that. She was one of them, no better than them actually. In free hours, the women would talk about day to day problems, and then drift to other people’s problems and then to things they’d heard about someone else, who eloped with whom, who disgraced whom, who died, who became parents etc. That is how news works in those villages, television brings news which doesn’t affect poor people, why would something happening in Delhi or Tamil Nadu be of any consequence to a little patch of houses in an obscure hillside.

Eventually, she found better employment. She got the job of a cook and maid in a house in the town, who paid her rather adequately. Five thousand bucks a month with a place to live and the same food she cooked, it was fair enough. The employer himself was a man in his mid-forties who had not married. He was a contractor. Not everyone knew this in the village initially, but then as things are, soon everyone talked about it in hushed tones. When she married off her daughter to a person who had a stable job, everyone was a little surprised. On top of it, she even managed to give away some new furniture. Everyone lauded her for her courage; the conversations always started with such positive emotion, and then they’d soon talk that she worked for a single man, and lived there for days at stretch while her children stayed alone at home and soon it’d not be of any good.

Then, she’d moved the ‘Gram Panchayat’ to grant some funding for her new brick house. There was some scheme that someone told her might help her. This house, on this small isolated hill is where she’d chosen to get it built, away from the village. Soon, she moved into her new home which had a cemented roof (the older one had slates and wood). She brought new, secondhand furniture into this house. The boy was now lived with his sister who’d looked after him all these years. They’d drop by often, these cellphones have made communications a lot easier. She did it all, she pulled it off, all alone.

But it was that one fateful evening that someone from the village saw her riding behind some guy on a bike to her house. That had been the first time anyone from the village had seen that person. The news spread like fire and as night drew, and men returned from fields and markets, some drunk, some tired, they heard it too. They made haste and soon, the culprit fled fearing for his life. They didn’t see anything, no one ever claimed they did, except for the missing ‘dupatta’ which was more than sufficient proof for someone trying to defile their village woman, a widow. She tried to explain that he had helped her bring some things from the market and was known to her, but they had their conclusions.

Soon, she was quiet and so she stayed for a very long time, squatted, head on knees. Being a widow did take away many things from her, thanks to the customs. . ‘Bad influence on the children’, ‘casting lustful eyes on their women’, ‘protecting the heritage’, ‘fighting for righteousness’, she thought about them for a while, and then about the people who said them. Drunkards, woman beaters, gamblers, people who whiled away their time on a game of cards, foul mouthed (and yet, honest and too simple minded; though she didn’t think of them) who’d do no good but backbite her. So, THIS was what it was to be a widow? She was merely a toy, none of them gave two hoots about her doing anything to her outside the village. They probably wanted to entertain themselves with something new after a tiring day. Fine. But no heavens could break on her, there wasn’t anything left. She picked herself again, and went to sleep.

P.S. To make commenting easy as 1,2,3, try logging in with Google or Facebook in the right sidebar (First widget). It is a one time process and after that you can simply click on the sidebar and login as you do on any other side (like blogger or wordpress or facebook).