We have a noisy maid. Not that she is noisy all the time, but her voice is so shrill that it is like an audio tape on fast forward (something like this, only much more legible). Note when I say shrill, you might think that I am exaggerating (since I also claim to have Misophonia). I also dare say that I find our beloved (new)‘Nightingale of India’ Lata ji’s voice too shrill in many (ok, most of the songs) for my liking, with the quality of speakers in a cheap radio or an auto rickshaw furthering my ear’s unease. Inspite of the fact that I just said it, if you get a chance to hear her (my maid, not Lata ji) when she’s explodes from the kitchen that ‘bhaiya Pyaaz khatam ho gaya hai, doosre wale bhaiya se keh do ke le aayein’ (We’ve run out of onions once again, please tell the other ‘bhaiya’ to fetch more) you’ll be patting my back for putting up with such third degree torture.

It was one particular day when the water flowed over way over safe limits. I had just picked up an important call and at the same time, her rants and announcements started. The fact that rest of my roommates have pampered her too much to encourage her to ‘take cooking initiatives on her own’ and surprise us rather than wait for someone to tell her what is to be cooked, has done more harm than good. They’ve disarmed her inhibition, and now she walks like a titan, trampling our sorry ears and also demands attention like a bad girlfriend. When we don’t, she cooks some quick food in a quicker manner and gets out, we’re too lazy to do something about it later. Also that none of us moves our butt from our chairs and beds to respond to her SOSs, the volley of arguments and counter arguments often flow across rooms into the kitchen and back. So, that day, I was really pissed off, and literally wanted to bark, telling everyone to shut up. Now the rules of social etiquette forbade me from blaring at her a ‘shut the hell up’ crescendo as I would like it, particularly because we were essentially paying for our own (good) deeds, we’d agitated the devil.

But something had to be done. If I cannot tell her how annoying she becomes at such times, someone else should? Talking Tom on androids would do a good job, but then, he needs to be operated by someone around her. And making people realize how annoying they are is harder than diffusing a bomb (in counter strike of course, I’ve never seen a real bomb let alone diffusing it) so it is better done by firing guns from behind someone else’s shoulders. I remembered an old toy. I rushed to eBay and ordered one of its variants right away without thinking about the cost or anything, the moment I hung up the phone call. Too bad I didn’t get the exact thing, which could have been perfect.

I made just one mistake, I told my room-mates about it, and the reasons why I was bringing the artillery. With immense alacrity, one of them announced the news to our beloved maid that ‘I’ was getting her a ‘gift’. I was like ‘bleh! There goes my hero’. Caught, even before making a move. Darn! My enthusiasm on this project plummeted like a broken arrow. Nevertheless, what was done was done. The good point is that she’ll now know who is annoyed with her, should she try to make amends. There was just one thing she didn’t know, what the gift was. Maybe she laughed it off, because I am the last person she’d expect a gift from. 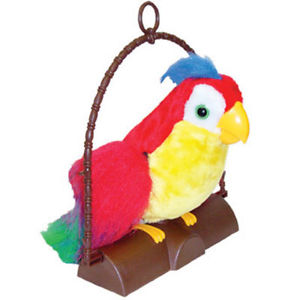 A few days later, it arrived. The same guy who had broken the news of my getting her a gift, in his enthusiasm took the initiative to present it to her, of course with ‘dekho bhaiya tumhare liye kya laaye’ (See what bhaiya has brought for you). The rest of us were holed up in the adjacent room like scientists who’d just commenced the countdown for missile launch. She was delighted at first, and started to blabber like she does. And then the parrot did what it was supposed to. It repeated what she said, (and because Chinese things are unpredictable, it repeated that twice). Her expression must have been priceless, because what we heard next was, well, we were laughing, holding on to our stomachs (but of course, without making a sound). ‘Arey ye to meri nakal utaarta hai’ (Darn it mimicks me), said she in a meek voice. She tried to shut it up, by saying things to it, but it would just talk back. The more she tried to stop it, the more it talked, and the harder we laughed.

While we were midst our merry making, she dropped a bomb on us, in a very broken, pleading voice. ‘Bhaiya, please isko chup karwao warna mein ja rahi hoon.’ (Please make it shut up or else I’m leaving) Now we were back to diffusing the bomb. Food, who’ll do it, what if she doesn’t come back, we’re done for at least a week before we find another one. Darn, Darn, Darn. She refused to listen to anything unless we shut it down. She wouldn’t listen that it would keep quiet if she kept quiet, and finally I had to say it, what I had been avoiding. I told her that I’ll switch it on every time she becomes too noisy.

It seems she did not mind it too much, thankfully and much to her credit. My roommates have also found a tease for her, when they want to pester her. They just flick it on and hang it at a height she cannot reach. Meanwhile, she has made peace with the parrot and talks to it when she feels neglected in the house.