A few months ago, I got a small lesson in human anatomy while cleaning my bathroom. I was acutely made aware of where my lungs are. I had used acid to clean the tiles and had a 3-micron industrial dust respirator mask on my face. It wasn't much different than the other times except for the shiny new mask and a belief that the mask will protect me from Chlorine. Other times, I had used a handkerchief, tightly smothering my face with one hand so that I would have to dash out to get some clean air after short intervals. Working with one hand, and partially choking on air was a handicap; I was bent on becoming more effective.

So I began the cleaning process with both my hands this time. And because I was going to be so effective while being cocooned by my benign mask, I used the solvent generously. The gas still reached my nose and down into my air-bags; it stung inside my nasal lining like it always did; Only this time, I chose to ignore it for I had my protective mask on. About a minute into the cleaning task, I felt funny somewhere in the middle of my torso. Funny and uncomfortable. It felt like countless tiny stabbings, like the feeling one might get when we press our hands against an array of uniformly placed dense needles - you know, those little rubber balls that were filled with All-Pins in some art project when I was in school. Or perhaps, some acupuncture needle ball. And so I went out in the balcony and drew some super deep breaths. The discomfort vanished, and I realized how skewed my notion of body geometry has been. I now know exactly where the lower part of my lungs are - the ones I use the most. But I also learned how it feels to hurt inside.

Today, that feeling is returning. Only this time, it isn't fading with breathing alone. I am not cleaning my bathroom. In fact, I have just stepped out into my balcony in the morning. I don't have a nose that is too sensitive to smell. But, I can smell the air right now, and it isn't pleasant. At all! 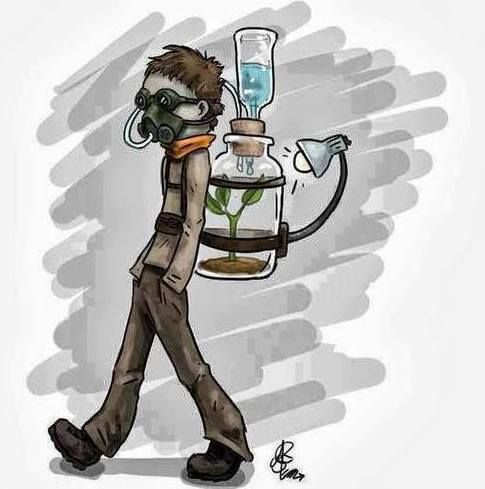 By the way, Chlorine and other gases are usually less than a micron in size, so that 3-micron mask wasn't going to save me anyway - as I have now learned. But look at how dismal this statistic is.

It feels funny! We are not even trying. At least, raise those standards to something like 500 for 10 microns particulate and 300 for 2.5 micron particulate matter! I think I will hurt less because I would be obliged to hurt less seeing that the situation is 'not that bad'! Please, revise those emission levels for we cannot emit less. I have already given up on the quality of water.

The underground water particulate density here is around 800 parts per million and more. You know what is the limit for potable water? 100ppm for unfiltered spring water. Where I come from, the spring water has a ppm of around 70-90. Here, I drink water from an RO which labors to reduce that 800 to 53. But, I close my eyes when I bathe with tap water. It's so hard that immersion rods don't survive a winter, the insides of buckets are coated white with carbonate deposits and if you just let water stand, a thin film of deposits would form on the surface in a matter of hours. Anyhow, when life is supposed to be hard, water too, is just setting the right example. The TDS meter guys should probably update their standards too. (Of course, it is a long shot. Here are the Indian Standards).

I can understand people are worried - worried that some burnt their crop stubble in the nearby states. Those sons of guns, those imbeciles, those illiterate monkeys jeopardizing the lives of innocent bydwellers! Snatch their dusty lands away and fill it with high rise concrete and paved roads and fancy plazas. Give them some taste of 'education' and 'clean' living - air conditioners and Euro 6 compliant petrol and diesel vehicles, packed milk and commodities.

The thing is, I don't think many are too worried - worried enough to do something about it, about their contribution to it. Why? Because it isn't killing us immediately. Things that don't kill immediately kill eventually. Heck, even Oxygen does that! See those people selling stuff with anti-oxidants? See yourself sipping on that hot green tea rich in antioxidants? Oxygen helps you age. No oxygen - no aging!

A branch of Hindu philosophy claims that the human body is made up of 5 chief elements (the panch maha-bhoot): Earth, Fire, Water, Air, Sky. But of course, we don't believe in bhoots now, do we? (Bhoot=Ghost) It's an old concept, we now know better - about atoms, and electrons and quarks and mesons and down we go the rabbit hole. We've banished the bhoots by a mere act of desecration. We are in control, we should be if we aren't.

Meanwhile, I will cling to the safety of my house, and of my office, and of the cabs and cars with ACs running and windows shut tight. The air can't reach me here. I don't have time to find out how I am contributing to this problem. I definitely don't think I alone can solve this problem, why even bother trying? I will ponder on the ways we could ameliorate this situation and how policymakers would have to deal with this situation with an iron fist. It is a systemic problem, must be solved on that level - by those who are in charge. I can solve such systemic problems quite easily, of course when no one's asking me, when I don't have to do anything else. So, I will. I will solve this problem while I wait in the herd of closely packed cars with engines and ACs running, waiting for all-too-many traffic signals to turn green.