It was a funny kind of evening - funny not in a hilarious sense but in an uneventfully eventful way. I thought I'd get out and do some late-night street photography. Partially lit streets have that kind of charm, no? But midnight was a good 2 hours away. That is a quirk of mine. When something scheduled is up and nearby, I am pretty much useless for anything productive. So I thought I'd while away time clicking pics of empty swings - expecting to have the park to myself at 10 in the night.

On my way, a friend I had not talked to in a long while called and asked if it were a wrong time to talk. Pretty unconventional? People usually ask if it's the right time, and this guy is asking if it's the wrong time. I asked him if there is ever a right time anyway? Luckily, he's a 'friend' who gets it...

There were a lot of people in the park. There goes my wishful thinking. Ye Dilli hai meri jaan! I tried to capture swings, but all pics were bad pics. Also, I sensed that the novelty of being 'out' (which was the first and the last in a long long time) was misplaced. Of course! The sense of novelty makes us do things, and they often turn out to be something else when the rosy tints are removed by reality. There were mosquitoes, it was hot and humid, and I had no idea what I was doing there or how to approach my target. I was waiting for 12 o'clock - a pipedream when the streets would be mine. 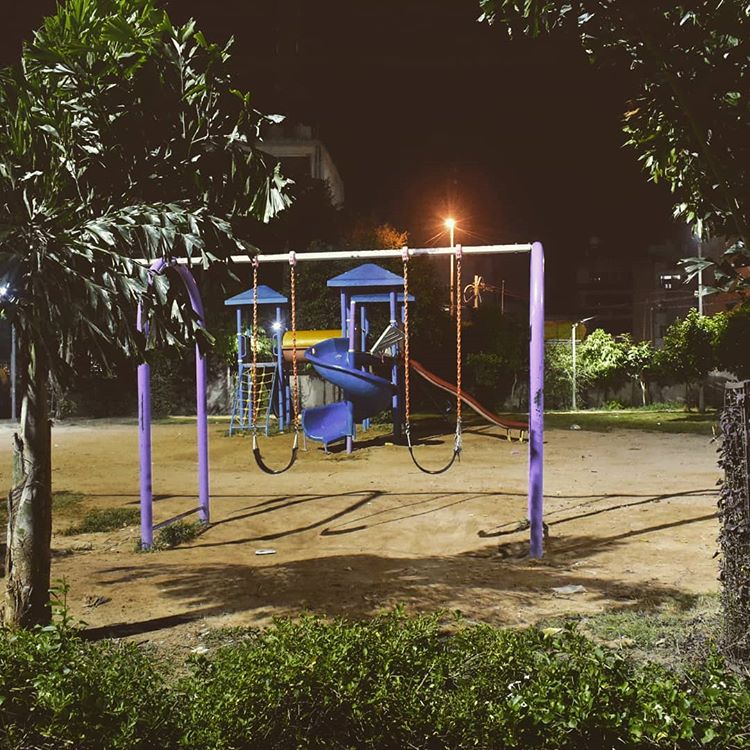 In between, I met a guy who asked if I were doing some project. I told him that I was just a barsaati mendhak (seasonal frog) out to do nothing in particular. This guy is a small-time musician, much younger than me, who also had done some commercial gigs, and was running circles in the park to stave off boredom and loneliness (he cheekily told me that he didn't want to always resort to injections to combat the feeling). I understood. I told him that he looked like a friend of mine who was currently somewhere in the UK. But I kept forgetting the name of the place. I also didn't notice that the name of the place was irrelevant and I was fussing for nothing. We talked briefly, he said that he'd also like to experiment with different things and that I had just shown him one other way - photography. Then he continued rolling his stone, and I carried on with rolling mine. The park emptied - save for us three. Myself, the musician, and a drunk man who just wanted me to click pictures of him by the volleyball court in the regional jersey he was wearing. I did and it made him extremely happy in his stupor. The musician stopped by again by 12, asking if he could have a look at the pictures. I told him that he could but that it would be boring since all I was doing was varying ISO settings and shutter speeds seeing how images came out and not doing anything fancy. The drunk guy made the musician leave by 12, but not me. I prepared to leave anyhow. He requested one last photo by the gates. I was wary, and still, somewhat happy about having made someone happy.

I don't fully understand what joy he might have derived from being clicked when he would not have access to the photos later. But I did show him then, and he seemed to have liked it.

Out on the road, there was a cow passing by a sign that said 'Pedestrian Crossing'. I was amused but didn't realize that I had shut down the camera. By the time I fumbled to pull out the lens, the moment had passed. I let it pass. I know what I saw. 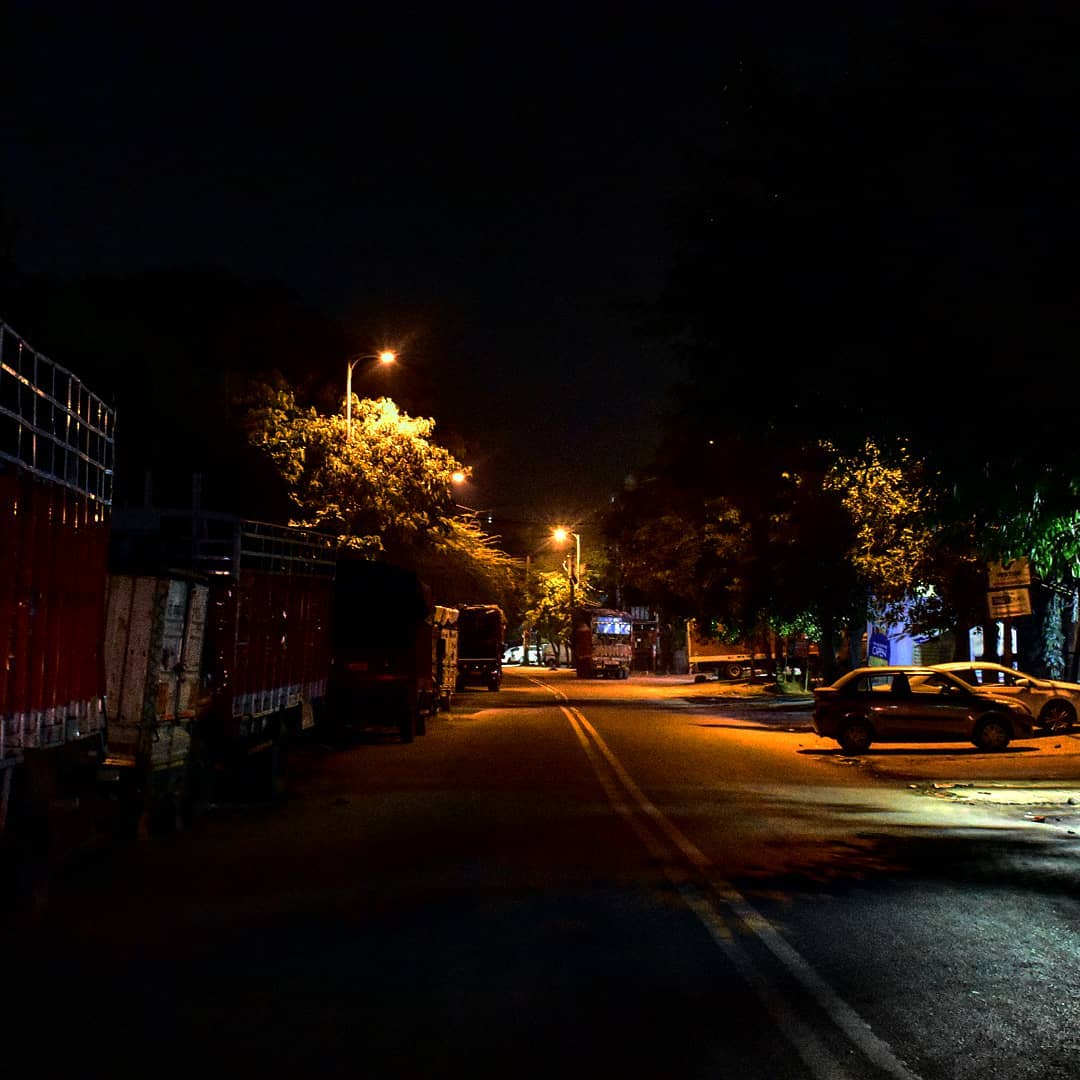 On the final bend, I waited for an approaching car to pass by before clicking this photo. Soon, the car stopped, the driver called me and asked what I was doing. I answered wryly that I was wandering around clicking what I found pretty. He felt antagonized - asked whose building I lived in. I asked if he had a problem. He said photography was not allowed on that road. I offered that it was a public road and there is no such sign. He intimidated by saying (in his Haryanvi tone) - 'aaja gaadi mein baith dikhata hoon kahan likha hai aage'. I've lived here. There's no such sign. I ignored his invitation. (I find the intonation of the word gaadi in Haryanvi quite amusing. It's गाडी, not गाड़ी in this dialect, as if the 'bindu' at the bottom of the letter has been willfully dropped to make it sound brusque and sharp. Imposes a sharp stop at the word.) Anyhow, I didn't want to escalate or spoil whatever mood I was in. He persisted and when I started to move away called out again. I could sense my disenchantment being replaced by a mix of fear, anger, impatience, and many other colors. It's midnight, I'm on the home stretch and this guy is trying to poke his nose for some forsaken reason. While stepping out of my home, I had deliberated if I wanted to carry the wallet. I had decided not to - just one ID and a hundred rupee note. I could feel the ID in my pocket, but also wondered - by what authority is he demanding to know my whereabouts? He asked whose building I lived in. I gave him a vague idea - that it is a building constructed by the counselor (took the surname). He retorted that there was no building of that guy in the area I mentioned and that he was a relative, dished out his phone saying give me the number of the builder. I was getting pissed too. I simply told him to not believe if he didn't want to. He kinda changed tactics then and said as if trying to help me - 'idhar case chal raha hai' (there's a case going on), don't take photos. Then he went. And also took away my leftover appetite for clicking the streets for the night.

On my way back, I remembered that the entire clan of those guys is in politics - probably why I was talking about one guy and he understood the other, and he probably belonged to the current MLAs side (AAP) while I was talking about the one in BJP. Exerting authority by raising voice or by threat - when that didn't fully work, an ego massage to himself by being gentle. Nice play. Makes me think of ways to authority with more perspectives.