Society - I love and I loathe

In a recent wedding, when the groom had departed with his newly wed wife, I was piqued by a conversation of the 'teeka list'. There is always a person who's keeping a list of who gave what to the bride, or groom in weddings in our villages. I wondered where does all that money go, do the parents of the bride keep it, or do they give it to the bride only? What was revealed was very enlightening and a beautiful insight into the foresight of our founding fathers.
The 'teeka', which comes with a suit-piece, or something, is given to the bride, since it is meant for her only. But the 'teeka' from the family members, from the village family is something of financial help, that every family had agreed to help with in case of such occasions of mass assembly. My uncle who explained this to me made me aware of a long and richly kept tradition and why it is the way it is. He gave me the reason for doing so, here I am drawing the conjecture of how the communities worked back then, the time of which I have no idea, a tradition which is many generations old.

I think it has its roots in how community was supposed to work, and dates back into the time when the trade was essentially barter, rather than exchange of currency for value. The community, as a whole is a single entity and each part of this community has a function. Also plausible that most villages sprung up from single families and then migrated to nearby places as the size grew. While all can grow wheat and rice and vegetables and fruits in their fields, but each piece of land has its own identity, its own peculiarity and fertility for some crops while hostility for others. Also, the finiteness of the land that one could own makes it a very tough job to care after all these crop types and all these things without messing up. So, this community, came upon a mutual agreement that the (kind of) port-folios would be given to each person, regarding the kind of work they'd do, depending on their physical ability and the specialty of the piece of land they owned and that they would help others with what grew on their lands in return for what grew on other man's land. Since marriages are lavish affair, the burden is even more and the village members pledged certain amount of grain, and other resources to carry out the function smoothly. 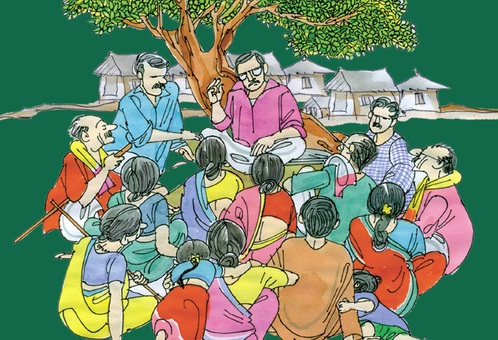 The replacement of barter with currency brought with it a normalization of resources, and theoretically, more fairness to the value of each commodity. But, the concept of pledging of resources, now in terms of money did not stop, practically because money did not change anything else other than making this market system a bit more systematic, though it might also have introduced disparities of its own as we started to think in terms of abstract money rather than real food. They recognized two very simple facts, one person cannot do everything, and no man is an island. The community as a whole is an organism. Individuals are to a community what trees are to a forest, separate and yet one.

But what is heartening is, that such system has carried on since many generations, undergoing little changes, as time proceeded. This fixing of quota to be expected from every house was kept in view of different capabilities of each house and was set to such quantities that even the worst off family could contribute without hesitation. Equal participation seems to have been at the center of this entire concept.

What was more enlightening was the knowledge that it is not done just at the times of celebration. Community members came together in times of distress, in mournings, and that makes it all the more respectable in my eyes for that is what I think it works like. It is fairly progressive, as people meet after scheduled intervals of time to reevaluate the amount of contribution that each one can give from time to time, commensurate with changing times.

I am reminded here of this Manga, Naruto (Yes, I love cartoons and anime), which also hinges on the concept of saving the village, and how wars spawn from it. True, everything has its fair and dark sides, but there has to be an equilibrium for progressive societies. Or else, it doesn't work, I don't expect it to work, in the long run.

What if someone wants to give more? They can, but it isn't logged in the lists.

Some may express dissent over why they should contribute when they no longer have any liability to take care of? That is why there is a log of who gave what. This dissent is taken as a sign of departing, and the person is eased out of the community circle, silently. They are on their own and karma being the fair bitch that it is, always strikes back when such voluntary outcastes have to lick their own wounds as there is no one to take care of them. What could this probably tell you about the orthodoxy of village societies? That they're old and seem silly, and we can laugh them off and disregard, that we may run away from our homelands and dwell in our self founded colonies and societies, but, sooner or later, we'll see what it all meant. Nevertheless,

We shall not cease from exploration
And the end of all our exploring
Will be to arrive where we started
And know the place for the first time.