I took a day off from office yesterday. Surprise day offs sometimes afford me the luxury of having the entire day and the house to myself - kitchen included. Maids don't like surprise calls to duty and I like to keep it that way only. So it was one of those days when I get my own (mis)adventure in the kitchen.

And thus, I set forth with the pressure cooker, to temper some ingredients of my favourite cuisine (which I don't ask my maid to cook anytime because after my mother, only I know the secret recipe of this not so secret food item). As the butter heated up, I made a mental note that butter produces smoke faster than I can work with. But by the time I added other ingredients into the pot, it had become a chimney effusing tons of clouds made of fragrant smoke. Ours is an open kitchen, so whatever happens in the kitchen doesn't stay in the kitchen. Soon, the entire house was filled with a sublime layer of smoke and a sweet reminiscent of what (the Rock?) was cooking.

I did not see the cloud immediately. But when I did, I was transported back in time to my childhood days. We have a prayer room back in the mountains where my parents would sit us down and sing `aartis` sometimes. As children, we were not allowed to light the oil lamp on our own, but for participation in the activity, we were assigned the task of lighting up incense candles (or dhoop and aggarbattis). Later in the evening, I would occasionally have the chance to go back there and the moment I switched on the tube light, I'd see clouds of incense in multiple layers. It felt awesome back then, as I can remember. It resembled my view of heaven - there's God sitting somewhere around and then there's a sublime sky filled with fluffy clouds.

The cloud that I had created in my kitchen today felt just as awesome. (And I also liked what had been cooked, though I claim to have poor taste in humour and food; whatever passes as eatable, is eatable - whatever passes as humourous, is humourous). You know you are flying. I like to have some irrelevant thoughts too. Keeps my house. 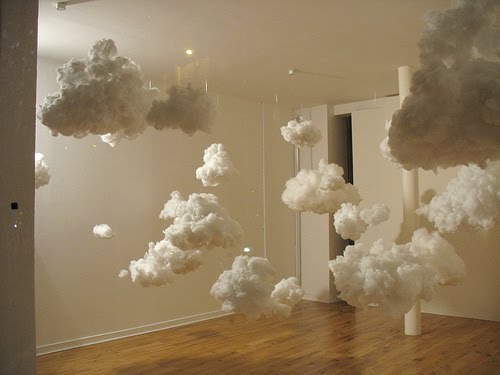