The curious case of urinal selection

Man is a crazy animal. An illusory beast breathes fire within most men which must be fed with a muse or at least a ruse lest it may feast on them. Let’s take women as exception to the theory here (save for the exceptional lot), for I am afraid I do not understand them well and fear retaliation at any perceived negative connotation. So, where was I? Yes, men are crazy. “An empty mind is the devils workshop” isn’t entirely true. An empty mind is the best thing that could happen to men (and it happens often), but the problem is that the Devil is quick to act and fill the room. We do weird stuff in the name of research.

Many a times, while visiting public (men’s) restrooms, I’ve wondered how I instantly make a choice of the urinal I want to relieve myself into. Even in office, where there aren’t many (4 to be precise), I automatically pick my favorite spot. If it is taken, I automatically elect a new one. A particular catch 22 situation is when the favorite and the lesser favorite are already taken. It makes no sense, I know; it might sound silly too. But it just, is. 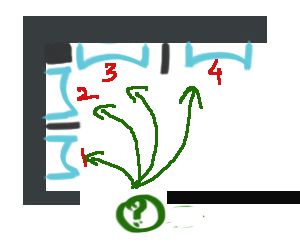 The other day while I was washing hands after having emptying my sack into my favorite pod, a friend walked in. ‘How do you choose a urinal?’, I started impromptu. Taken a little aback by the ambush, ‘What?’ he asked dumbfoundedly. I rephrased my question, ‘When you entered this rest room, you had no idea which urinal would be available, but the moment you see the situation, you create a availability chart (like that in trains) and automatically decide which urinal you wish to bestow your pee on’. A little recovered from the sudden onslaught, he retorted with a ‘that is absurd’ claim and went about finishing his business there. On our way out, I pestered him to think how he made that decision and he deflected such pondering by stating that he took any urinal which was available. His answer unsettled me. As I’ve often turned to ‘Google baba’ when in doubt, this time too, it had stories to tell.

This phenomenon has been studied and has often been stated as a computer program problem. There are even papers on this topic and of course, I’m not the only one wondering about it. Some attribute it to the width of our personal circles. It is something that I learnt from reading Allan Pease that people from village backgrounds (or rather oriental people which would be more apt) tend to have a wide personal circle primarily because they’ve grown up in open spaces and are used to that. So, anyone else into that circle without invitation is clearly trespassing and we become uncomfortable. Then it is also projected that people from the city (or occidental people) have relatively smaller personal circles (but I think it is more of baloney rather than fact if I am going along with believing that all people in villages are oriental or everyone in the city is from the occident). Many people, including me believe that there is a system (a rational one) which governs everything. We reject it because we don’t get it. But someday we will. As Chuck said, “There are only patterns, patterns on top of patterns, patterns that affect other patterns. Patterns hidden by patterns. Patterns within patterns. If you watch close, history does nothing but repeat itself. What we call chaos is just patterns we haven't recognized. What we call random is just patterns we can't decipher. What we can't understand we call nonsense. What we can't read we call gibberish.”

I am also happy to inform that it is not just men who think out loud on such topics. Many of the posts that I read in this regard were from women e.g. Here (Which was the reason to include a few, exceptional women).

The problem is still being discussed in certain circles (not in any that I know of). But I am sure that the one who’d find the most logical solution or algorithm in this problem would do so while sitting in the loo. No wonder toilet is the place where real ideas take shape.

Just for the record, here are a few unsaid rules:

Here are some of the many criteria:
(1) You don't want to be next to someone if you don't have to.
(2) You don't want to be the weird who just goes straight to the corner; you want it to LOOK random
(3) You don't want to force the next person to violate one of the rules (so you choice depends on your estimate of the encounter rate in this particular restroom, which is not a factor I identified).
(4) You want to be acutely sensitive to slight deviations in body positions that could signal that you might accidentally touch shoulders... or worse.

(Source) And they are pretty satisfactory :D