The Kite Runner - For you, a thousand times over 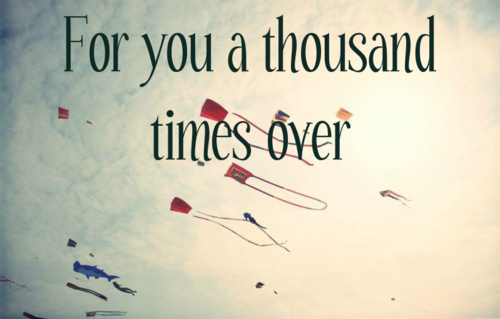 These discussions can be looked upon as a continuation of the book review of 'The Kite Runner' by Khaled Hossieni which I have posted here. But these discuss the story (hence spoilers) and thus, are a separate post. I suggest you also read the review (read that before reading this for that might make more sense).

The pride and the jealousy that Amir felt for his father against Hassan is something that is bittersweet but a characteristic of many people. I think, it is this characteristic that has potential of making us into a wonderful butterfly, or a jealous moth. Oh children are naive and their experiences of this phase are seldom looked upon with retrospect of their older eyes, but with the same naivete that is somehow preserved, intact with the experiences. Memories accrue, but the eyes which revisit them seldom grow wiser, unless we will ourselves to see the memories in new light. Now, isn’t first love precious? Now, don’t you know why?

“With me as the glaring exception, my father molded the world around him to his liking. The problem, of course, was that Baba saw the world in black and white. And he got to decide what was black and what was white. You can’t love a person who lives that way without fearing him too. Maybe even hating him a little.”

But did Baba not love Amir, despite his apprehensions regarding Amir? Oh how could it be any other way? Who would tell his son what he thought what sin is, contrary to what the brown bearded mullahs crooned into the ears of young boys in school? Who would laugh and explain that John Wayne was not really Iranian, but a bonhomie American whose voice was dubbed into Farsi before being reeled for the appropriate audience? But of course, there is this bittersweet irony that we, as children knew our parents did those things for us, we remember them the way they were, and yet, when we wonder if they loved us, we can only recount the times when they appeared not to, or maybe that is what we want to remember.

“That same night, I wrote my first short story. It took me thirty minutes. It was a dark little tale about a man who found a magic cup and learned that if he wept into the cup, his tears turned into pearls. But even though he had always been poor, he was a happy man and rarely shed a tear. So he found ways to make himself sad so that his tears could make him rich. As the pearls piled up, so did his greed grow. The story ended with the man sitting on a mountain of pearls, knife in hand, weeping helplessly into the cup with his beloved wife’s slain body in his arms.”

Uh oh, that seems too much of an allegory. Do I not feed on other’s sadness? Does not relieving them of it make me happy, would I not make them bleed only to heal it back? But there’s a difference again, I understand gratefulness and the virtues of moderation. The question is, will I remember it IF I actually got a literal magical cup?

‘“Eat dirt if I told you to,” I said. I knew I was being cruel, like when I’d taunt him if he didn’t know some big word. But there was something fascinating - albeit in a sick way - about teasing Hassan. Kind of like when we used to play insect torture. Except now, he was the ant and I was holding the magnifying glass.’

How to redeem yourself? Amir tried to instigate Hassan, ‘hit me back!’. THAT, it is a kind of masochism with a hope of redemption. Isn’t that what I would mean if I said “don’t take my grudges to bed”? And yet, Amir was denied. Because redemption lied not in such kind of atonement, but the first step was to ask, ask for forgiveness explicitly for what was done. And no, he wasn’t there to blame either. Not exactly, it was a self-claimed guilt.

The story of America isn’t as detailed to give an impression of a hard-hearted Baba Jan. Maybe he changed, he softened up on his son while staying rock solid on his principles. He became more of a responsible single parent. It is not that he was irresponsible in Afghanistan, but by the way of description from the child’s eyes, he was more stern then, than now. In a way, his transformation is touching, and yet, his acumen and dignity command respect. Above all, the way he presented Amir in front of others, it seemed like he had wholeheartedly accepted the will of his son to be a writer, a decision which he had disapproved of before. Then, Amir might be right too, Baba Jan was fighting the Afghan society in Afghanistan, he couldn’t lower his guard, he was an oddball. Now in America, there was no need to be up with defenses all the time. America embraced oddballs like him.

The patriarchy, and how the society (Afghan society here) always blamed the woman and made her the gossip material. It seems to be a common thread. Here, and in his other works too.

Little snippets tell you a lot many things. For example, Aflatoon is the Farsi for Plato, and behold! What a wonderful thought, “if you looked hard enough and long enough into the dog's filmy black eyes, you'd swear he was thinking wise thoughts”. There is a common thread that runs among people who know something wise about living, it is a calculated carelessness, an idyllic misdemeanour in their manner. Why? A dog is easily amused.

"How seemless seemed love and then came trouble.", the beggar said, quoting Hafez in reference to the advent of Taliban. Isn't it funny that you don't have to be educated to know poems and maxims, what are they after all, but conundrums that fit into our lives? The trouble is, sometimes we become too educated to wonder if we could ever understand poems. I wonder why, why do we torment ourselves with such a stupid thought. The beggar though, was not a beggar, but used to be a teacher at the university. "The desert weed lives on, but the flower of spring blooms and wilts." Oh, beautiful! I want to read Khayyam (since that is the name I am familiar with, though Hafez is getting familiar too, now).

A personal relatable thought for I had written something of this sort not one week ago in a conversation with a friend. She (Amir’s mother) said,

“I am so afraid. Because I am so profoundly happy, Dr. Rasul. Happiness like this is frightening. They only let you be this happy if they're preparing to take something from you.”

The incident with Andrew in the embassy is something worth discussing. How, in our misery, or sum of miseries, we might say something to another person without really knowing them, just to 'let them have it'. Amir taunted him "they ought to put someone in your chair who knows what it's like to want a child." On his way out, he learned that Andrew lost his daughter, to suicide.

The story paints such an elegant picture of a Pakistan which is not torn by turmoil. A place where people breathe a free air, and there are laws of welfare which appoint a security guard for suicidal cases in the hospital, where people are treated well. You know, it feels kind of strange, that what was once happening in Pakistan's neighborhood soon moved into Pakistan, and today, Pakistan too seems to be in chaos. It makes me feel sorry for Pakistan. The peoples don't want this as much as I know. A select few who hold the controls might be to blame. I fear for our neighbor. I fear for our nation.