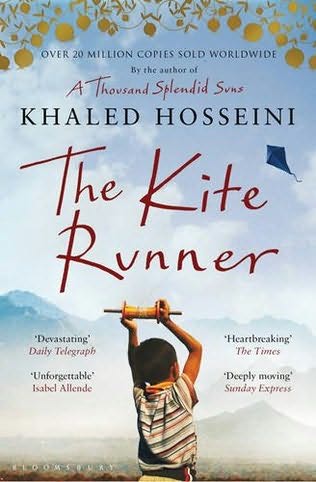 I read the book after having read the others, in a reverse chronological order. ‘The Kite Runner’, is the story of Amir, and of Hassan. It was this book which broke Khaled Hosseini’s ‘arranged marriage’ with his medical profession; he consequently moved in permanently with his ‘mistress’ - writing, to become a full time writer. Since then, he has written 2 other major Novels, ‘A Thousand Splendid Suns’ and ‘And the Mountains echoed’, each of which has earned worldwide acclaim. This one, however, is a little different.

Amir grew up in Afghanistan, growing up under the towering and stoic presence of his father (whom he called ‘Baba’ and that is what we would also call him), a self-made man, bent on shaping the world the way he wanted. Baba lost his beloved wife when she was giving birth to Amir, which Amir thinks to be the reason why Baba tends to hate him, sometimes. They had a Hazara servant family, Ali, and later, his son Hassan. Hassan’s mother ran away with a gang of singers one week after she gave birth to him. Hassan and Amir were fed from the same breast. Ali used to say that “there was a brotherhood between people who had fed from the same breast, a kinship that not even time could break.” This bond is tested time and again throughout the book.

Amir was timid and soft in tastes. He had a mind for literature, something that he inherited from his mother. Hassan was illiterate in books, but abundantly rich in everything else - courage, faithfulness, compassion, positivity, guilelessness. Sometimes, Amir would be jealous of him.

Baba treated the two equally, well, as much as he could. Sometimes, Amir wished that Baba didn’t do that, he wanted to have a privilege of being Baba’s son, Hassan was a servant’s son, no matter if the servant and his generations had served their family. Baba had an appetite for grandeur - he made everything with his heart in it, and consequently, he made it grand. He had a knack for proving people wrong when it came to people judging him. As Amir wrote,

“With me as the glaring exception, my father molded the world around him to his liking. The problem, of course, was that Baba saw the world in black and white. And he got to decide what was black and what was white. You can’t love a person who lives that way without fearing him too. Maybe even hating him a little.”

Somehow, they had to part. That changed Baba forever. And then, Soviet tanks rolled into Afghanistan throwing the country into the depths of a devastating slumber of turmoil and bloodshed from where, she has only recently managed to clamber out with some degree of success. Meanwhile, Baba took Amir to the United States where he graduated, and Baba grew old, softened but still a true Pashtun. There, Amir married the love of his life Soraya. But like a lodestone, Amir was drawn back to Afghanistan by a simple message ‘come, there is a way to be good again.’

The rest of the story is his journey, of being ‘good again’.

The story is fresh, one read and you would know that it has to be the debut. It is that kind of fresh! It has the untarnished fragrance of a flower in its first bloom - in a way that it is silly and even that makes sense. It is a story that a child would recite to you, and even when it would break your heart, you have to listen to the child.

It shows the contrast in the then (pre-conflict) and the now (of the Taliban era). It narrates how the people had welcomed the Taliban and how it became the serpent that would bite them back. "How seemless seemed love and then came trouble." A professor in the university teaching poetry of Hafez and Khayyam once is now a street beggar, living in tattered clothes, scavenging for food and begging for alms. How the Taliban appropriated whatever it wanted by force or by a silly reason, and killed people under the name of ‘self-defence’, or Allah.

The story has an abundance of enduring folk wisdom. It is indeed heartening to see that poetry, or wisdom doesn’t have to be commensurate with education levels. It can be earned by paying attention to things around.

The story is beautiful, it takes you up on a joy ride of love, and fun that a child can feel, and it takes you to the depths of guilt, and despondency that non-confiding can bring. It paints such an appealing picture of how forgiveness comes around.

"...I wondered if that was how forgiveness budded, not with the fanfare of epiphany, but with pain gathering its things, packing up, and slipping away unannounced in the middle of the night."

“Write about Afghanistan, write about your Watan”, said everyone who met Amir and came to know that he was a writer, or going to be one. He said, “but I am not that kind of a writer.” And yet, this is what he had been doing all the way along, Khaled Hosseini. Cliched?

'A creative writing teacher at San Jose State used to say about clichés: "Avoid them like the plague." Then he'd laugh at his own joke. The class laughed along with him, but I always thought clichés got a bum rap. Because, often, they're dead on. But the aptness of clinched saying is overshadowed by the nature of the saying as a cliché. For example, the "elephant in the room" saying. Nothing could more correctly describe the initial moments of my reunion with Rahim Khan.'

How’s that for a defense?