Dan Brown's flirtations with the existential questions, a book review

Dan Brown recently published his fifth installment of the Robert Langdon series - Origins. It is a fiction mystery thriller. Like other books with Robert Langdon as our beloved protagonist - it involves an interplay of cutting-edge science and cutthroat religion.

The aftertaste of his last novel 'Inferno' was not very pleasant for me. I even contemplated whether I had outgrown Danny boy. Possibly because I did not really want the conclusion of fiction to be real life-like - ambivalent - an in-between. The only way to know if I had outgrown or not was to read him again. I had decided that pre-orders are usually not very appetizing once they are over with but wasted not another moment when I remembered that the book released worldwide on 4th October. (Dan's publishers and PR team did an excellent job to popularize one of Dan's interview like an appetizer for the upcoming novel, a day or two before the release date to make sure people remembered. And here I am relinking to the same like some sheep.) 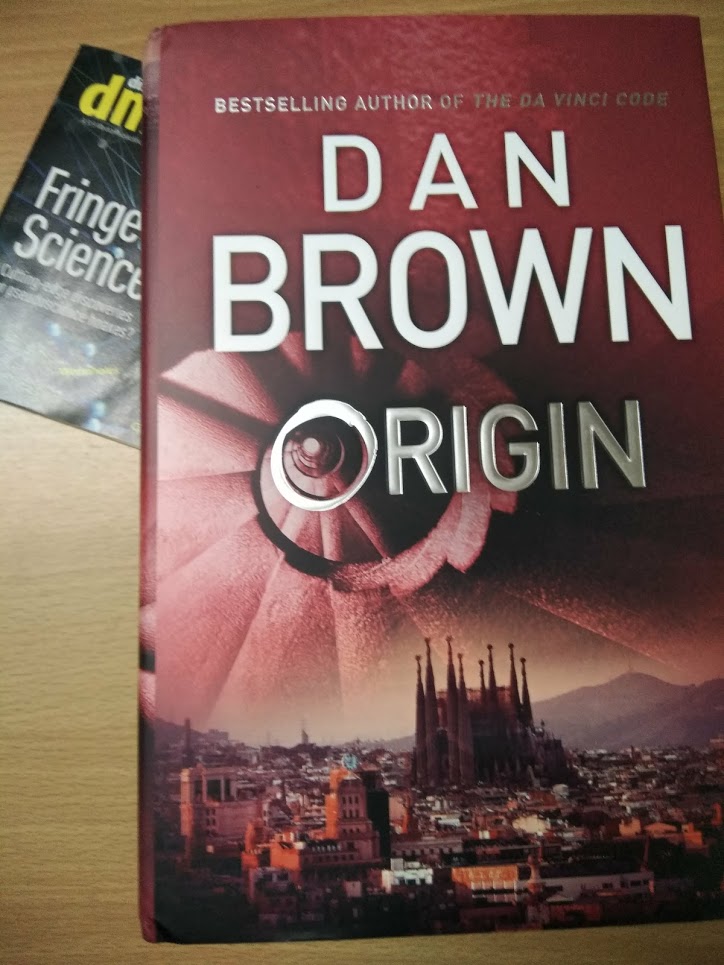 Robert Langdon is a professor of symbology and religion (and an atheist) at Harvard. He is invited to attend a grand announcement event at the Guggenheim Museum Bilbao by one of his former students - Edmond Kirsch. Edmond - a Game Theorist - had been heralded as the prophet of the new age owing to his accurate predictions of events related to humans and economy. He has purported to reveal another ground-breaking scientific discovery at this event and has made huge arrangements to make it a success. Edmond builds up tempo with a grand prelude to his discovery by asking two existential questions: Where do we come from? Where are we going? Moments before Edmond could reveal his discovery, he is assassinated. The entire world stood aghast watching this live event!

Moments before the assassination, Winston - Edmond's brainchild synthetic intelligence (a fancier term for AI) - reaches out to Langdon in a desperate attempt to forewarn an anomaly in the guest list. This embroils Langdon as a suspect. What follows is Langdon's and Ambra Vidal's race against odds to uncover and bring to light what Edmond had discovered - something which somebody desperately wanted to stay hidden. Ambra Vidal is the curator of the museum and the 'Queen to be' of Madrid - engaged to Prince Julian.

Because Ambra is the Queen to be, the Royal Palace had good ties with Christianity and because Edmond was an atheist, the Royal Palace is implicated in the crime. This comes at a precarious time when the monarchy is about to change hands while the general, common youth is in favour of abolishing the dying institute of a monarchy. Little pieces of evidence trickle down on conspiracy groups worldwide implicating the Church too. Other leads indicate a political motivation behind the act. Then, another type of Church also gets into the limelight. Conspiracy theories abound and a few ancillary characters play around to keep the reader guessing as to who might be behind this devious plan. Dan Brown has done a good job in keeping this guessing game interesting.

Winston emerges as a really vital resource and enabler to Langdon and Ambra. Without its help, it seems inconceivable if Langdon could have fared well. Edmond being a scientific figure hovering into the realm of solitary geniuses has a knack for suspense. He was almost like one man running a massive show (This is a critique and a compliment as well). So, it takes some time and investigation on Robert's part to find out the 37 letter poetry which is more like a prophecy, and is the password to Edmond's secure vault where the presentation detailing his discovery is stored; then to figure out as to where the vault might be. The two eventually succeed in what they set out to do. The answers are revealed.

Langdon's eye for detail hasn't grown old and neither has his exposition. Thankfully, unlike Inferno, he isn't found noticing the architecture while being chased down by a deadly assassin on his heels. The details set up the plot fluidly - when they should happen, only as much as is necessary. For example - the details about Sagrada Familia. It seems that Dan has left it to the readers to take a visual tour of the monument that has been under construction since 1882. There are moments where they battle inches away from death and like any intense transitory battle, Dan has kept them short. Instead, the book seems to be dominated by Edmond's monologues. By the time he is done with his first monologue, a good chunk of the book is over (why is Aliva taking so long!). Later, when his presentation goes live, it is Edmond gushing through all the way; perhaps, a bit too belaboured.

I dallied in writing this review. It wasn't intentional, but that did help me see something about this story. Looking back, Dan Brown took a one sentence story and made a fairly gripping 450-page narrative out of it. Pretty good, heh? The language is fairly simple, except for the occasional use of exact words. I for example, had to resist the temptation to lurch for Wikipedia to see what a monk in a purple cassock and white rochet with a zucchetto on his head looks like. There's tech, there's religion, there's crime and there's a woman too who doesn't serve too big a purpose as per se except that her absence wouldn't have made it all possible. Heck, there's a handful of Nietzsche too. What is missing is Robert's tweed jacket. The general restlessness to find the culprit and the plot too is there.

The premise isn't very strong, but the narration more or less makes up for it. Dan also touches upon some subtler aspects of our society in a more subtle way - issues like homosexuality and the question about loving many simultaneously. For example, consider this: "Just as parents could love a newborn instantly without diminishing their love for each other, so now Ambra could feel affection for two different men. Love truly is not a finite emotion, she realized. It can be generated spontaneously out of nothing at all." It sometimes seems that Dan has excellent hold of scientific concepts too - but that weakens in hindsight. There are some inconsistencies that don't fit. For example, one cannot talk about a person being highly scientific (and that too in Game Theory which literally reeks of Probability) and not even talk of numerical values. How high is a high probability? Is 99% high, or 99.999% high? High enough for the reader to imagine - but unbecoming of a scientist. Are the two grand questions answered? And that too in a 'this changes everything we know' kind of way? Nah! Religions are far more sturdy than that! It does feel like a campaign with a lot of pump but without much pulp in it. However, that's just my taste and I am pretty bad at it. But of course, Edmond is also a great marketer! It has to be made a mountain out of a molehill. When you read it, you'll probably notice an undercurrent of a theme that justifies everything in the story. If I told you what it is (in this post), you might know the nuts and bolts of the story before you've half read it. So, I'll refrain. For a careful reader, there are many pointers to lead them to the culprit. I can finally boast of having figured it out a long time before, but there is a real giveaway a few chapters before the revelation is presented.

I do feel that an important person was not given even a single mention in the story - even when the concept (particularly, of bringing entropy into the picture) seemed dangerously close to some of his stories - Issac Asimov. Those who have read or intend to read this book, do give 'The Last Question' and 'The Last Answer' a pre-read. You'll thank me later.

Overall, a good one time read. I hope to rant more about it, I have a lot to rant about. But one question that still remains unanswered is, have I outgrown Dan Brown? I still don't know. Maybe next time...