Oath of the Vayuputras by Amish Tripathi 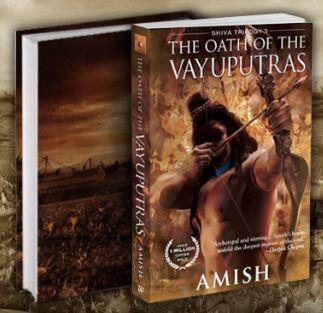 Book: The Oath of the Vayuputras

Foreword: The first book, ‘The immortals of Meluha’ laid the foundations of a solid plot intriguing a vast reader community of what would happen next. It was a success in the Indian Subcontinent and was received well. The second installment (Secret of the Nagas) however, was much criticized owing to its sloppy and flawed writing style and poor editing. It did not perform poorly among the audience though who received it with equal admiration and all eyes were set on the final installment. It took time and the expectations escalated. Not just a good climax, but many wrongs had to be made right. Did Amish succeed? That would be a personal opinion.

The story picks up from where it left off in the ‘Secret of the Nagas’ and lives up to its theme of fast paced action. The real evil is revealed much sooner than expected and then the story revolves around defeating it. But, this does not take away any element from the story and the reader is surprised many times, along with Shiva. Since the portrayal of Shiva has been human, the reader might be inclined to think that Shiva may have erred at arriving at such conclusion in haste, like any human. It is possible and Shiva would find out many things as the story progresses. The stories of Daivi Astras which the mythological characters fired in battlegrounds have been given a scientific bent depicting how we once possessed such vast scores of information; it was science to them, but is now magic for us. Many a times, the author challenges the way religion works by looking into the future from that time, how rationality and scientific temperament of asking question is corrupted and people come to accept things as they are told and make them a dogma. The theme of “change being the only constant” is aptly depicted through numerous incidents, of the past and the present. There are many philosophic diversions interleaved within the plot, but they have been broken down to such simplicity that most readers would not notice them as jargon, but would consider them to be a vital element of the storyline. These beliefs being attributed to each character give an insight into the thought process of each character which distinguishes him from the rest. Each character is unique and has a role to play. The situation of a Dharmayudha is beautifully depicted. Victors also lose many battles in a war. And when it is a Dharmayudha, there is unavoidable collateral damage. The language is good, and if you are used to reading the book with the dictionary by your side, you might be making a lot of notes. More so, it is appropriate and accurate in most places, succinct and neat. Overall, the story does not hang anywhere; it is like a smooth cadence. The reader will experience emotion of each character, of the light hearted badinage between a loving husband and wife, the affection between brothers, the care of the father and mother for their children, of lovers, or defiance, of sheer torture and war crimes, the helplessness and rage on losing one’s loved ones, of the call of duty. Amish has made a good effort in portraying a myriad of emotions and distributing them proportionately among characters.

It is confusing for me to understand the purpose of book review. Should a book review be written for those who’ve read the book, or for those who have apprehensions and are looking for apriori feedback to make their final decision? The ones who have read it, well, they don’t need the book review as they have already formed their view. Reading the review might be to check if they missed anything on the perspective. As for the newcomers, should the book review dwell in the mistakes and criticism of the book, or in forming wreaths of praises for the author, or should it be written to intrigue them to go and read it (Because reading is good)? Even if it has both, how much should be revealed so that the plot is not given away to the newcomers, nor do the ones who have read the book fail to notice it.

P.S. : This is my first post of this kind, as with the advent of this site, I shall be foraying into many genres of writing. Suggestions are welcome and even better if accompanied by targeted constructive criticism.

P.P.S: A separate discussion post for the ones who have read it is posted here, where we can talk about anything about the book.