A Salesman’s Lessons – What I studied is what I failed to see. 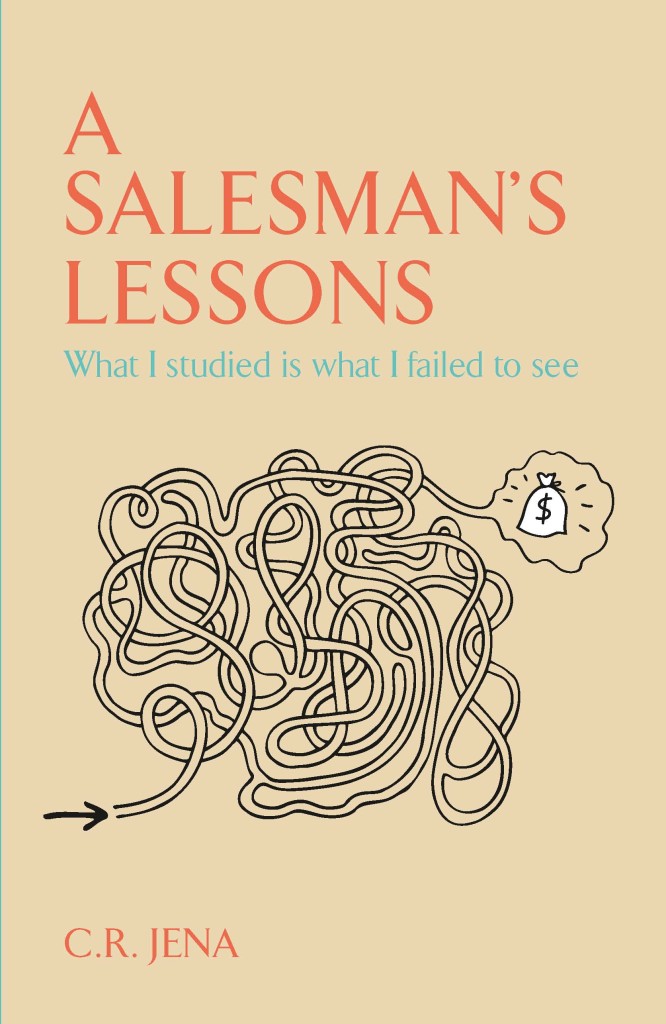 C. R. Jena being a pass out from the prestigious IIT Kharagpur and then from XIMB uses trivial mathematics equations as his vade-mecum to establish analogies between mathematical models from the abstract (and his indulgence with science) into the tricky field of Sales, which he has been grappling for past many years.

But I also think that not everything that is written in a diary, from which we learnt something should go into the making of a book. I sure can make everything fit, but making a fit isn’t the point in writing the book, to make sense is. Besides, it hovers mainly around selling, with traces of marketing acumen. An apt statement that ‘Humans as such have always been buying or selling something or the other’. But if it isn’t fun, it isn’t worth doing it. Everything can be made fun, but unfortunately, this book, for now did not help me becoming interested in sales.

The author offers advice to people into the sales business but lucidly adds that the content can act as guidance for anyone who reads it. Sure, it has very important life lessons, like calling people when there is no work, for the sake of talking, or for feedback, or giving a cold call, as he said, but if you don’t like it, well, don’t do it. The key points or the punch lines that the author wants us to make for our own at the end of each chapter appear more clichéd to me than saying it plainly.

It was a tedious read, the editing is sloppy and inadvertent typos have crept in, in many places. The topics are disconnected, paragraphs seem to be incoherent and the language is, well, trivial. There is more to poor editing rather than poor writing in the book. It feels like reading a print out of someone’s journal made in MS Word with all kinds of bulleting (without scheme) and the rationale of adding two back to back quotations at the start of every chapter which again in many cases are unformatted adds to a reader’s dismay.

The blurb on the back cover makes a claim that the book tries to find answers like ‘does what we learn in schools and colleges really apply in the real world’? The author has tried to explain mathematically (which is more of a learning aid for him as it seems from the book), but does not attempt to show if anything he learned in ‘Sales’ (Management course) helped him in the real world.

This isn’t a book for salesmen either. It doesn’t tell you how to sell, or how to sell well, but only what you should do before and after the sale has been made. Here, I’d make a generic claim that being social can be made a mechanical task by following guidelines, but sales isn’t exactly a field for the socially introverted. If I don’t feel at ease talking, then talking on the phone or in personal meetings will be artificial and that will show.

The bottom line? I will not recommend it to anyone, salesman or not.

P.S.: Another reason for my not being 'into' the book could be that it was a force read. But a force read book, if any good, can always get me interested if it is really good (according to my tastes).