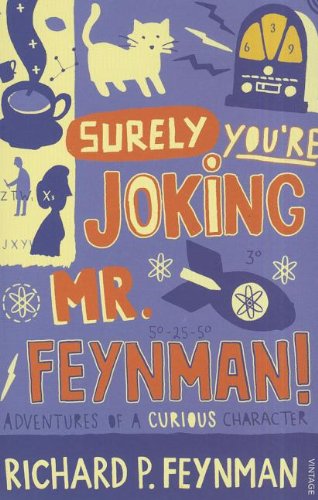 I don’t know where to start. I refuse to take up this review purely objectively for I’ve increasingly grown fond of this book and Richard Feynman every passing day.

It is supposed to be a book about episodes from Feynman’s life; that is exactly what it is. Feynman had a very curious life. He was many things in one and yet all traits derived from a single personality that he had. Each facet of his life was influenced by his core ideology of scientific inquiry, to not accept things for granted but to know why it is so, to break the status quo if it is sheer baloney.

Feynman takes us on a ride from his childhood, into freshmen years and then on into being an adult (a young adult albeit) and never does he tell how, or why he got famous. Feynman is considered to be the best Theoretical Physicist of his time, and possibly of today too. Ironically, this book is about everything but theoretical physics. Uncharacteristic of such a Colossus in scientific community, Feynman’s life seems to revolve around having a good time.

The writing has a flair and a style that will make you laugh along, and marvel at Feynman. His adventures are unabashed, and sometimes would be considered questionable from a societal point of view. Feynman did not worry because he considered himself uncultured. His revelations are startling and sometimes we’ll be in denial. It is quite possible that Feynman has exaggerated many of his stories to make it something noteworthy among readers, or maybe he was the biggest optimist - to see too much in too little, but that doesn’t belittle the fact that the book is in fact as beautiful as his mind. Feynman was/is famous for wrapping simple truths in good humor. He found that the world works this way. You tell the truth which is simple, and the world will not believe it (for it has to be something unintelligible, complex). This was also how he worked. He believed that there has to be a simple explanation for every problem (scientific or otherwise) which he demonstrated throughout his life.

Besides, had he been just a braggart without substance, he would have been reluctant in exposing his own fallacies; instead, he wore them on his sleeves, brandishing them around for everyone to have a good laugh. He had a huge ego, yes, but still had a lot of room for others. He believed in science, and that let him be what he was.

It is his opinion that placates me when I have doubts, that it is okay to have doubts, especially those which do not threaten our existence. It is those doubts which stir us vehemently that we must pay attention to – the ones which can haunt us to grave if left unattended.

By the time I reached the last chapter of this book, I had this urge to make it mine. Few books give us that feeling of holding treasure in your hands. There are books that others gift you, and then there are books that you gift yourself; but this is one book that I did not gift myself, nor did anyone do it for me, but I just felt the compulsion of having it forever. Yes, I ordered the book after I was done reading the book. While the words in the book ran their course, I was attracted to it blindly, all I wanted was this book to not end. I’ve read this book over a span of many months, relishing each chapter for a long time. The effects of people and books are almost the same, they run out once done and are seldom looked back. But it is also true that a part of every person or book remains with us for the rest of our lives, for we spent some undivided time with it and that was a choice that changed many things in this continuum of events. Timing is important, and I think it was the most opportune time when I read it. To commit that I’ll revisit this book would be wrong, I would think about returning to it, as I do for others but might never find leisure to actually read it again. But even if fragments of what I have learnt or understood from this book stay with me, I know I’ll find its echoes everywhere.

I think this review looks more like a character portrayal of Feynman or probably a eulogy and nothing about the book, but in a sense that too is right. I found a friend, a comrade and a person whose scientific method of living life is something worth emulating. From science or not, I urge you to read it once, read it at pleasure and I assure that it will be a time well spent. A must read for young people freshly venturing into science, though by the time they are able to actually get the depth of what is being said, it might be too late. A must read for people who are into science, and yet not quite into it. Above all, this fact (book) is the best, better than any fiction.

His life as it seems is something that could be described in the words that Harivansh Rai Bachchan often used to introduce himself.

The more I read of Feynman, the more I was attracted to know him more, to learn from him. Incidentally, I am not the only one who is inspired by this guy. Bill Gates has done a wonderful job in making his Introductory Lectures on Physics delivered at Cornell online, free of cost. If anyone is interested, ‘here’ is the link. For a longer version of his interview with BBC, here it is:

Edit: I found a pretty interesting Book Review from the past on this book, it is from the New York Times, Date: January 27, 1985, Sunday, Late City Final Edition Section 7; Page 13, Column 1; Book Review Desk Byline: By K.C. Cole. In case you need a better book review, that should suffice. (Link)