Book Review: The Diving Bell and the Butterfly

The Diving Bell and the Butterfly 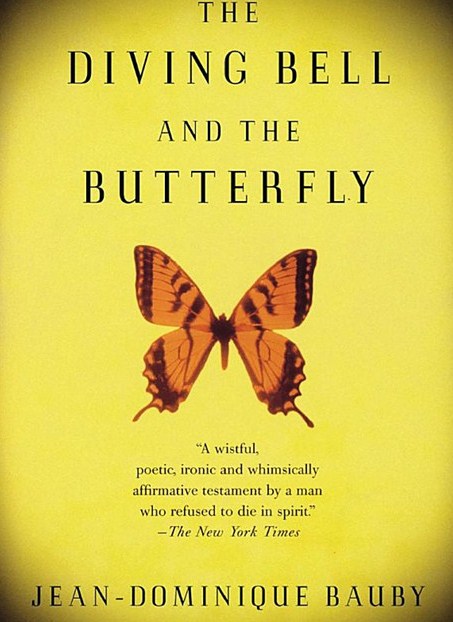 Jean-Dominique Bauby, noted for his wit and gregariousness and as the editor of the famous French magazine Elle, suffered a massive stroke that imprisoned his mind in a cellar of his skull with only his left eye functioning as a medium to interact with the outside world. This book, which he dictated letter-by-letter, is a memoir of his imprisoned mind, and its attempts to fly in the realm of mental space.

The book is a short read comprising of several memories, notes, and dreams dreamt in this phase, divided into short chapters. The chapters don't necessarily have any chronological order and may be read in any fashion. For me, it was a travel read, barely 150 pages of a comfortable font size and plenty of margins. The shortest chapter is barely 151 words! (Yes, I counted it). The language is short, elegant and unhurried making it seem like an easy read. It is a very disconnected memoir of a man who has room only as wide as his cranium living, and yet, a space as large as the world around us to live in. It is the flight of imagination, mixed with memories, dreams, wit, and wit laced sarcasm. The imagination is unbounded, with Bauby drawing from his vast treasures of journalistic experience. In some flights of imagination, he almost invites Empress Eugenie, patroness of the hospital he was in, to dance with him. In some wheel-chair trips, he charts down the entire hospital, its staffers and patient occupants who later appear in his dreams. While he is fed a brown fluid through tubes, he compensates for the loss of taste with the memories of taste of different foods that he had had, given his over-indulgence with food.

'The Diving Bell and the Butterfly' is pretty much an OK read, if one reads it without any cognizance of the condition or the manner in which this book has been narrated. I learnt about this book in the introductory lecture of a course on brain and neurons (which, unfortunately, I did not attend past the introductory lecture). So, the 'wow' effect of the capabilities of the human brain alone had pulled me towards reading this book, even though I took it up more than a year from having bought it. Separated from the reality, if one reads this book, one might pass Bauby as a very normal, healthy person, except in places where he finds himself angry with himself and is a bit too explicit about his state - "A triple dose of finest au de toilette fails to mask the reality: I stink.".

Somehow, the editor in chief of a widely popular magazine largely fails to make me see how difficult it must have been for him to go through such a crippling experience which were to last for a long long lifetime. However, he accepted it as a new life, and I treat it such. Still, I feel that Bauby made it too easy, except in certain nooks and corners when he took to talking about delicate things like his kids, his family, and sometimes, when he is a bit too blunt about his reality. Like here, where he talks of his 92 year old father, his nine year old daughter Celeste, and his girlfriend Florence.

"My daughter, Celeste, tells me of her adventures with her pony ... My father tells me how hard it is to stay on his feet... these two are the outer links of the chain of love that surrounds and protects me. I often wonder about the effect of these one-way conversations on those at the other end of the line. I am overwhelmed by them. How dearly I would love to be able to respond with something other than silence to these tender calls... Sweet Florence refuses to speak to me unless I first breathe noisily into the receiver..."

The frustration of this entrapment is most evident when with his family. He had so many plans of things to do together with his son, and he is stricken with grief for the kind of father he has become

Grief surges over me. His face not two feet from mine, my son Theophile sits patiently waiting - and I, his father, have lost the simple right to ruffle his bristly hair, clasp his downy neck, hug his small, lithe, warm body tight against me. There are no words to express it. My condition is monstrous, iniquitous, revolting, horrible. Suddenly I can take no more. Tears well and my throat emits a hoarse rattle that startles Theophile. Don't be scared, little man. I love you.

There is a part where he talks about the transience and the fun of conversational humour, that I have sometimes explained to a few friends as missing in long blog posts. And trust me, when I say I write for conversations, what Bauby writes will make you miss it, should it be taken away and more agonizingly, if we're given and denied.

"Want to play hangman?" asks Theophile, and I ache to tell him that I have enough on my plate playing quadriplegic. But my communication system disqualifies repartee: the keenest rapier grows dull and falls flat when it takes several minutes to thrust it home. By the time you strike, even you no longer understand what had seemed so witty before you started to dictate it, letter by letter. So the rules is to avoid impulsive sallies.

Of course, he talks of a plenty of happy memories. He describes his 'pilgrimage' with Josephine (former girlfriend), how he was spellbound by the adventures of Charles Sobhraj. He talks of his early days and earlier stint with newspaper, of the betting on a horse race among many other things. But for that, I'd rather have you read the book!

The title is wonderfully apt, and there is no explicit wisdom in the manner or content of this work. However, dig! In my opinion, it is extremely hard to splice a few memorable or touching quotes from this short, but elaborate account of life, a life that is lived in the head but feels just as real. He talks, in short allusions to various conditions of life, like of the time when the heaping up of calamities brings on uncontrollable nervous laughter - when, after a final blow from fate, we decide to treat it all as a joke. He takes digs at the 'tourists' in the hospital, temporary invalids, survivors of sport, highways and other accidents who get their shattered limbs working again in the rehabilitation room and go away, who are a bit too conscious, or furtive while looking at the quadriplegics like the author which paints a condescending picture of them.

But to keep my mind sharp, to avoid descending into resigned indifference, I maintain a level of resentment and anger, neither too much nor too little, just as a pressure cooker has a safety valve to keep it from exploding.

It turns emotional in many turns of pages, should you choose to read it slowly. And should you do it any more slowly, you might shed a lone tear too. Otherwise, it is pretty decent read.

I am the hero of Godard's Pierrot le Fou, my face smeared blue, a garland of dynamite sticks encircling my head. The temptation to strike a match drift by, like a cloud...

Did I not explain a similar predicament to a dear friend very recently? How strong are our butterflies?