Book Review - What do you care what other people think?

What do you care what other people think? 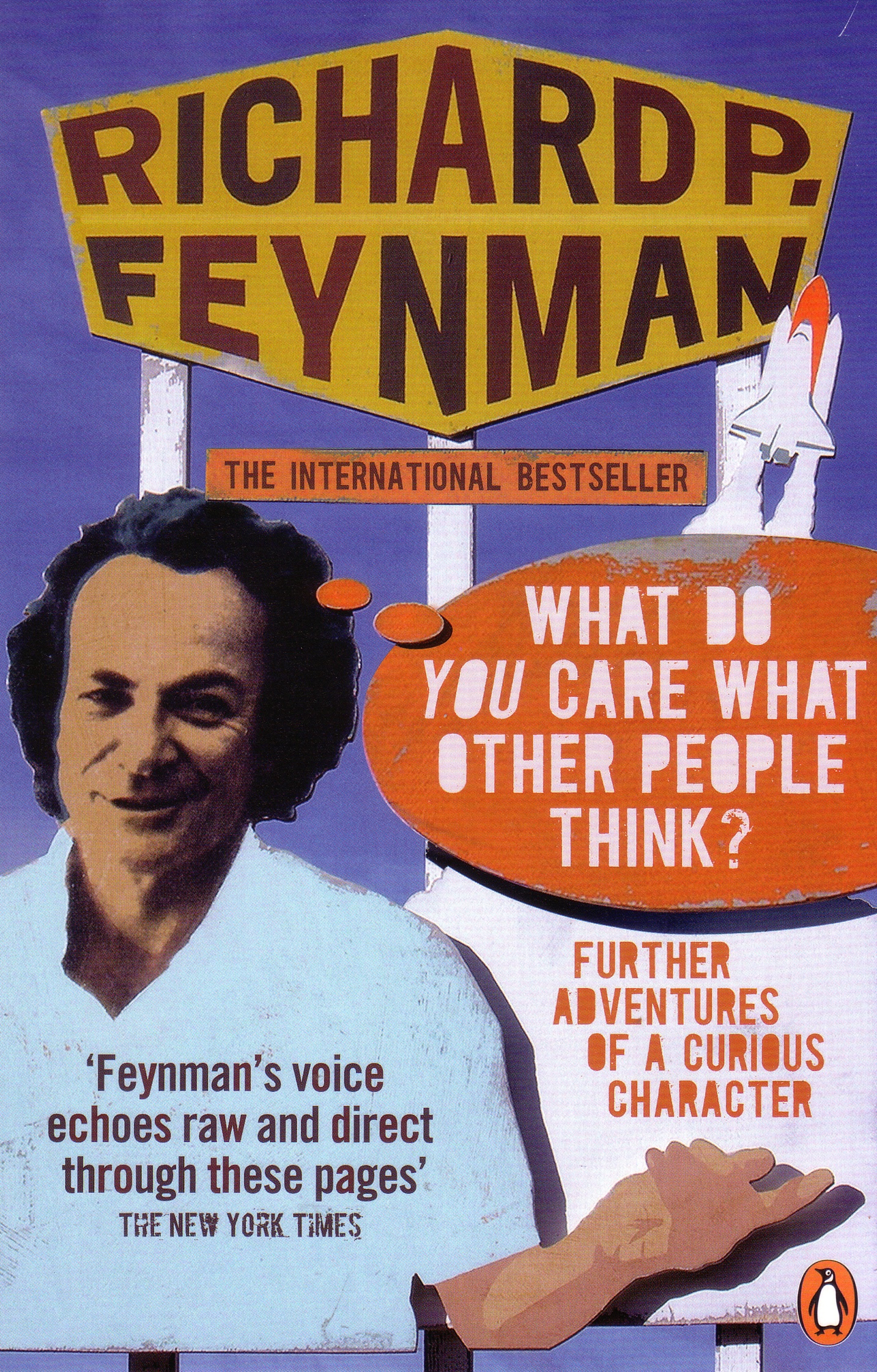 ‘What do you care what other people think’ was what Feynman said to Arlene, his love, and his first wife whom, he married despite knowing that she had tuberculosis and would not survive more than a few years. He said it when she was studying philosophy, and he was helping her out, much before he became her fiance. It is also the same term that Arlene, a wild and free character that she was, used to tease Feynman when he was shy of doing something that he might have wanted to do, for himself or for her, thinking ‘what will other people think?’. Feynman admits that Arlene had a very deep impact on his life, they were in love, a very beautiful kind of love.

These are some more adventures of Feynman, the Nobel laureate in physics, and one of the most kick ass scientists of the 20th century. As the ‘Guardian’ aptly wrote, “he is everything you want and expect a scientist to be: Charming, sceptical, funny, blindingly intelligent… Confirms one’s suspicions that Feynman was probably the coolest scientist who ever lived.’ A big chunk of this book is devoted to his last big adventure, the experiences he had while on the Presidential commission investigating the Columbia space shuttle disaster. It is indeed unnerving to know how communication gaps, ulterior motives, irreverence of procedures, and dogmatic adherence to things which no longer work can be the cause of great loss. This book has a more serious overtone to it than its predecessor, ‘surely you’re joking, Mr Feynman’, but when Feynman did what he did best, it was a riot of emotions. Once again, his candidness is breathtaking, and it is heartening to know that he found people who could appreciate the quality. Call it luck if you believe it, or a lie that a beautiful man tells defend his people, but it restores the confidence that despite everything, we will never run out of good souls.

There are a few chapters in this book that have been published separately by various colleges, like this one titled – ‘it is as easy as one, two, three’ which I would encourage you to read post this article (I have put up a link to one copy at the bottom of this post).

He was brought up in a way that encouraged free enquiry. One of his anecdotes about the Sunday School, of how he pondered upon and found that most of the ‘miracles’ that the rabbi told them about could have been explained in terms of physical phenomena sheds a little light on how he withdrew from religion and became an atheist. For example, ‘at the end, the rabbi described how Ruth was dying in prison: “And she thought, while she was dying” - blah, blah. That was a shock to me, after the lesson was over, I went up to him and said, “how did they know what she thought when she was dying?” He says, “well, of course, in order to explain more vividly how the Jews suffered, we made up the story of Ruth. It wasn’t a real individual.”… I felt terribly deceived…” I’ve been listening to all these stories, and now I don’t know, of all the things you told me, which were true and which are not true! I don’t know what I am to do with everything that I’ve learnt!”’

He talks of his relationship with Arlene, and how it had shaped his life, which illustrates the need of finding the right person with whom you can be yourself. As painful as it is, and the curiosity and disconnectedness with which he talks about those things, I think I can relate to that, as if I have had first-hand experience. Such is his expression, making a human connect all the time. For example when he found that Arlene was sick, he went up to the library and read about the symptoms and the possible ailments. Later he told Arlene “the joke about the people who don’t know any medicine reading the medical book and always assuming they have a fatal disease.” The truth and integrity that they had in their relationship is really very inspiring.

Much of this book was written while he was battling cancer, but never did cancer tarnish his way of life, or the bubbling enthusiasm with which he lived it. The letters he sent to his wife, and the letters others sent to their wives, telling about Feynman, one cannot believe the dynamism that was Richard Feynman. The way he had time for children, and how Charles loved him to the point that he was crying out loud saying 'I want Dick' Dick being Feynman's alias, and how Feynman had made up for his absence which everyone else couldn't help but admire, Feynman stands out as a towering figure in many things, not just science. "Conversations then ceased as the company listened to the joyful sounds above, sometimes taking the form of a duet, and sometimes of a one man percussion band..." (Freeman to his family in a letter). His life is awe inspiring, or at least the way he told the story. He is unabashed in admitting that what he thinks the effect he had, and what it actually had been were quite different, but the letters of other people mentioning him in high regard tell a different story. ‘(I recently discovered a transcript of my speech, and what I said at the beginning doesn’t seem anywhere near as dramatic as the way I remember it. What I actually remember saying is much more wonderful than what I actually said!)’

The story gets a little technical in its second half, partly because the problem being dealt with was technical, but Feynman brings his craft of explaining things to laymen, and media persons, in a way no other scientist of that time did. There isn't much to be said about the writing style, for it closely matches the way he talked and it feels like he is talking to you straight from the pages. I recommend that you watch his BBC documentary interview before embarking on any of his books, you too will never be alone, and can imagine him speaking. This is funny, for he too had wondered why we can reconstruct people's voice exactly in our heads when they aren't there. (Reference, his interview for the Army, Surely you are joking).

To break the lull of the second part, he ends the book on a very beautiful note, completely inspirational. I would want to tell you what it is. It is a public address given at the 1955 autumn meeting of the National Academy of Sciences. In one of his letters to Gweneth, while he was telling her about the conversation he had with the Queen of Sweden and the Queen had remarked “you must feel good, working for peace like that”, to which he had promptly replied “no, that never enters my head, whether it is for peace or otherwise. We don’t know.” In his last chapter, he tells about a Buddhist proverb: “to every man is given the key to the gates of heaven; the same key opens the gates of hell.” Such was science to him.

Overall, a very beautiful book, which has only added fire to my curiosity to read him more, for I have a few theories, and I'd love to hear what he thought of them, if he also thought of them, and wrote about them.

Links: It is as easy as one, two, three: Link

The value of science: Link