These are vignettes from Sudha Murty's short columns written for the fortnightly 'New Sunday Express'. She draws them from her personal treasure of experiences had had over the course of time - a majority of them coming from her working with the Infosys Foundation. These are stories of very ordinary people, but the stories- like the lives of people in them - are not ordinary. 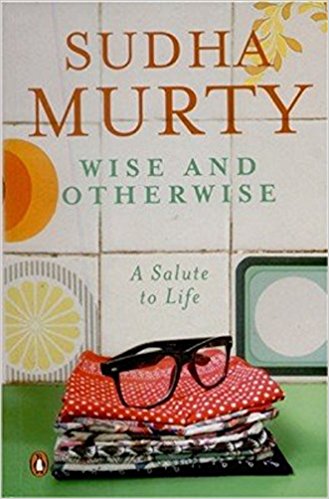 Sudha Murty is the founder of the CSR wing of Infosys - the Infosys Foundation - one of the few home-grown companies of India in the IT sector. Sudha is a prolific writer and a teacher. She draws these stories from her vast chest of experiences acquired over her lifetime of service to the people. There are 51 of them, all short and each one unique in its own right.

It is a beautiful window into the diversity of the conditions in which Indians from varied walks of life spend their lives. From the vast landscapes of urbanized India to the hinterlands where access to primary education is meagre if at all, there are stories about everyone. A lot of this book is about contrasts. From the changing dynamics of our modernizing society where grown-ups are more relieved than saddened by the demise of their old parents, to families who resort to deceit in order to rid themselves of their living parents (without much expense), there is much to think and worry about the (d)evolution path we are treading. She talks about human frailties and about that bloated ego which drives some people to resort to unfair practices when none is warranted - much ado about nothing. In the very next overtone, she shows the other end of the spectrum where humility comes from a very unexpected quarter - sometimes from a handicraft seller family of Gujarat, sometimes from the uneducated Thandappa and sometimes from her own house maid. She marvels at the honesty of children and then lifts the lid from a darker issue - the ones who must set an example resort to exploitation at the expense of others. How bad a grouchy company can be is amply expressed in her moods when she talks about some people. Then, she goes on to showcase how thinking well can not only transform our own lives, but the lives we touch. All in all, the book covers a broad spectrum of social and personal issues - with a story coming from each extreme of the topics. A stingy donor who'll claim credit to even the smallest contribution, to some unknown benefactor who gives amply but anonymously; The young generation that splurges money like running water to a young generation that puts non-violence and the lessons learnt from violence over innovations like Computers and the Internet in terms of significance; A student who still retains the sense of gratitude for a help provided for in need, to another who grew out of exactly the same circumstances but took a different path with a sense of entitlement rather than gratitude.

In a story about bursting stoves, Sudha experiences the plight of young girls from poor families who are tormented by their in-laws for dowry. It would rouse anyone to violent action on impulse, should anyone be in her position - and yet, she shows the helplessness she felt. Law takes its own course. She works on the grass-root levels instead. Don't just trim the weed, eradicate the seed. She emphasizes the importance of education and developing self-sufficiency among women so that they can take on this unfair world without needing the crutches of her husband or in-laws (or parents, for that sake).

Yet, in another story a few pages ahead, she dwells upon this dilemma of independence again. Well educated girls who earn enough still bear the brunt of their in-laws' bloated expectations and consequently, their ridicule and neglect, are still crying. She wonders, what did education bring them, and how are they any different from the underprivileged girls she comes across. There, she suggests that self-sufficiency is something that current education cannot bring - it is a feeling, a thought process that is currently missing amongst us. Some women are bold enough to step up and take command of their ships. There are success stories of an illiterate woman who gets an equal say in what crop is to be planted in the season, to her own friend from college years - whom everybody thought to have been a mediocre and expected to have a mediocre lifestyle. Diamonds in the rough.

Sudha comes across as a defiant lady with a tender heart. It is mind-boggling to think that she does so much and yet, she does it anyway. There is amazement and disappointment when some of her own friends and acquaintances have a negative outlook towards life - one even asking her as to who ghost-writes her articles and books since she can't be doing so much work (and yet finding time of more). One gets to learn a lot about the work Infosys Foundation does through these short stories.

There are traces where one might wonder why did she have to be so brash and blunt to the people as if it was her prerogative to set people right - like telling the son whose father had died that "it is shameful the way you and your father cooked up this drama for the sake of a few thousand rupees!...And you are setting a bad example...". Throughout the story, one feels bad for the old man, who had been abandoned by his son and had nowhere to go. Later, when it is revealed that the father, no matter how helpless he was, was complicit in the act - the ire of the reader is still directed at the son and daughter-in-law. Sudha, on the other hand, is angry with both the father and son. But I think she does a suitable job - objectively. She is a teacher, she talks like one. Plain, simple well-meaning words. (Even if we don't like lectures).

I found there to be an awful lot of stories written about women - both good and bad. It is perhaps my tenacity of the negative that I write hence. Often - and stereotypically so - the women lot draw a bad name when it comes to worldly and interpersonal things. In some of these stories (at least 2), it is interesting to note how a husband gets to lay blame on his 'controlling wife' who did not like her in-laws. Today, with the rise of this notion of 'feminism', the acts of injustice on a woman are flung across billboards and make hot debate agendas. But it is often noted, as in this book too, that women are more disapproving of other women - a mother-in-law uses her influence on her son and they torture his wife for dowry, a wife uses her influence to get rid of the ailing father. All that the husband gets to do is hang his head in shame and (with a weak spine) obey. Whose fault is it? I think it is a collective fault. Of course, there are many stories of the legendary fragile male ego, they are bigger blunders over trifling matters. There is grace in upholding the values imbibed by the cultures of the place. I don't think any place would advocate any of these things we read about. What culture suggests estranging one's parents when they most need you? Or torturing someone for the sake of material greed? But let us not strip the yarn from the weave!

All in all, the stories are short, crisp and very matter-of-factly written. While the language flows smoothly, some stories do leave you with some heaviness in the heart and a lot more to think about. While it might not leave you wisened, it provides a refreshingly good start.