'Ghost stories of Shimla Hills' is an assorted collection of 15 short ghost stories collected by the author Minakshi Chaudhry from the folks in and around Shimla. The original tellers and re-tellers claimed them to be real experiences; that causes me some trouble in classifying the book as a work of fiction. 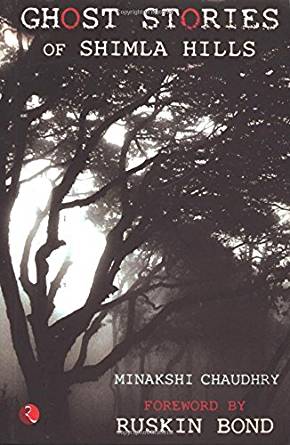 I bought this book (and another sequel) impulsively while visiting The Mall road at Shimla, hoping it would make some short and crisp reading on my train journey back to my workplace. It turned out to be just the perfect companion for the time we spent together. What's more? I realized I have read this book before!

The book introduces to the readers a myriad of ghosts or 'bhoots' and 'churails' that walk midst the folks of Shimla hills. Some ghosts are old, dating back to the British Raj which took liking of the place and never left. Others are more local in nature. All sorts of bhoots are introduced - the malicious, the benign, the lovelorn wandering soul which hasn't let go of its unfulfilled love even in the next rebirth, the merciful and the guardians. It is a pleasant reminder that ghosts too can have a portfolio and may not always be scary or inclined to kill. One will merely slap you if you don't give him a lighter for his cigarette (too bad if you are a non-smoker), a few are content to just walk alongside for some time, others just happened to have a casual chat amongst themselves when you decided to pass them by.

Among the regaling stories of stupefying paranormal encounters is a redolent exhibit of the life and culture of the place. In a world where it is considered unsafe for the woman to stay out alone at night, a roadside peddler reaching out to a lonely woman ambling in the desolate midnight streets of Boileauganj with an intent to help is a pleasant reminder of how one should be - even when the woman turns out to be a ghost. Woven into the ghost stories of yesteryears is the fragrance of Shimla's history. How Shimla was once used as a Sanatorium by the British and how it eventually became the summer capital of the Raj. We come to know why there's a middle bazaar and lower bazaar in Shimla, but no Upper bazaar. There's a one line history of the Christ Church that stands out on any night as a landmark figure of the Ridge and Shimla. It tells about the brusque nature of the paharis when they can ask any kind of personal question without thinking about its appropriateness for the occasion and also the welcoming nature when they get you fresh yield of apples from their orchards without deliberately seeking any favour.

It will tell you about the places to go - and the places you could have gone to - before they were usurped by the dwellers to satiate the increasing demand for space to live and subsist. The little-known trivia about the place and its attractions pandering to the thirst of both kind of tourists - the paranormal and the nature lovers - is sprinkled in the stories. For example, a huge water reservoir under The Ridge which serves as a major storage area for the water supply of the town is a less known or conveniently forgotten fact among the pedestrians walking over it. Of course, this puts immense pressure on top of it by their sheer number. No one even thinks that it could capsize and it essentially is a walking hazard. I think it would be a digression to lament about the environmental or cultural issues that sometimes become apparent during the course of these stories. One can find an agenda anywhere. But there is a sweet ache when the very settings that let the ghost stories thrive, the whistling woods, the foggy mountain ambiance and the winding ivys are quickly being replaced by a labyrinth of unorganized concrete structures.

Anyhow, the stories are short and crisp. Most of them have an element of awe and wonder of a first-hand narrative. They are not too spooky except a few like the ghost of Boileauganj and Fruit Seller; Spooked is the one who suffers first hand, the reader is easily amused (unless the narration puts him in the plot). A very good and enjoyable read nevertheless. It leaves you with some enchantment, the thrill of wanting to experience one for yourself and doing a double take the very next moment for wishing something this insane. It is very less TV like and the ghosts are more... reasonable.