Mein Kampf - A book in retrospect 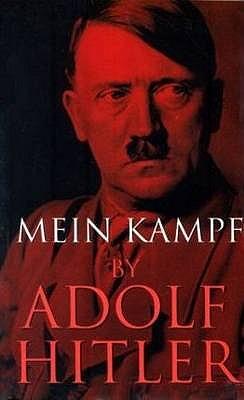 The book is divided into two parts, the first one was dictated while Hitler was in prison, serving his term following the trail at the Munich people's court, and the second one was written later. The translator has tried his best to place before the reader the circumstances 'which brought the author into this plight' and the 'historical happenings of the time' which had brought on Germany its hours of deepest humiliation.

In praise of the person named Adolf Hitler:

When I had started to read this book, a few people who had read it, or perhaps had left reading it told me that the book lies. Of course it does (on its back, sorry), but that is no reason for not reading it. Also, it doesn't lie absolutely, but in a few parts. Rest is just us, connecting the dots.

Hitler, through this book elucidates his grasp on public psyche, the use of propaganda, and the flaws of a system suffering from constant decadence. If not for anything else, this book is a very gentle introduction to the affairs of the state, an insight into the democratic parliamentary system, its flaws and the ways in which these flaws are exploited, and responsibilities for actions are evaded by the 'representatives of the people' in a classic herd phenomenon. Above all, it is written with ardent love for ones country, and the burning desire to put it back to the top of the world, after having suffered innumerable humiliations.

It is interesting to note how history repeats itself. Hitler writes of his father,

“He was simply incapable of imagining that I might reject what had meant everything to him. My father's decision was simple, definite, clear and, in his eyes, it was something to be taken for granted. A man of such a nature who had become an autocrat by reason of his own hard struggle for existence, could not think of allowing 'inexperienced' and irresponsible young fellows to choose their own careers.”

Hitler also carved his own career with his own will, and rose to a height where he could alter (and perhaps, end) the paths of many lives. And through his hard struggle, he too, in my view became much like his father, self righteous, honest, a man of integrity, but blind. The difference was that he gained unsurpassed power. He developed a deep affection to the fatherland (German Empire) he felt estranged from as a part of an Austrian province, his love for his people evident throughout the book.

He explains beautifully how propaganda works, and who is it targeted at. He has had very simple, yet accurate concepts of governance and state policy.

In critique of the person, Adolf Hitler:

There are a few things which I cannot fathom whence they came from. First was this concept of the Aryan race. Everything was moderately fine, until Hitler suddenly introduces the only race capable of creating sustainable civilizations, the ‘Aryans’. There was no prelude to it. The anti-semitic poison had been spewed a few times before, along with many reasons which he saw in them, and ironically not in anyone else, but this was like a bolt from nowhere.

Second, Hitler seemed to be a firm believer of two things - the Nature’s law of ‘Survival of the fittest’ and ‘Providence’. For every hard time he went through, he saw it the working of Fate to bring him on terms with the vagaries of life which would open his eyes to the flaws of the system. Rather than wallowing in ‘why is this happening to me’, he fought it through. He wrote,

‘Obstacles are placed across our path in life, not to be boggled at but to be surmounted. And I was fully determined to surmount these obstacles, having the picture of my father constantly before my mind, who had raised himself by his own efforts to the position of a civil servant though he was the poor son of a village shoemaker.’... At that time my lot in life seemed to me a harsh one; but to-day I see in it wise working of Providence.

For his propaganda, or perhaps his belief, he relied heavily on the ‘Law of survival of the fittest’, and evolution. In most places, where he uses reason, he is more or less correct. Things go awry when he applies reason partially. For example, scattered throughout the book, he expounds the ‘conspiracy’ of the Jew, of world domination by using mental trickery and conquering the world through international finance; he again and again accuses them of using mental deceit and chicanery to leech on the community they live in, and ultimately, hand it over to their Jew masters; but everytime he does so, he exclusively considers the ‘fittest’ to be physically fit while considering the Jews physically incapable of much defence. And if you are an admirer of guts and wits, you cannot but help marvel, and possibly admire their method which has kept them on the winning side while religions came, crusaded and went, nations rose and crumbled. On the other hand, he depicts the German lot, the Aryans, as honorable and strong but gullible. He accuses the Jew, the merchant, of bringing the blacks into Europe, and eventually adulterating the white blood when strife for equal rights and mingling of races takes place. A strong believer that strong bloodlines must stay strong, he rejects the possibility of having a strong gene in the other ‘inferior’ races which only deserve being subdued and being raised by their Aryan masters, which might look inhumane in a small time frame, but is for their own good, for Aryans bring order and mechanisation with them.

While he is quite sound in having the representatives of the state being accountable individually to their actions, and the mettle required in such people to own their wins and losses, in the second part of the book he proposes something that is an unhealthy form of monarchy. One man on top, everyone answers to him, and he to nobody; why? Because he was elected to that place by the people. This is quite ridiculous considering that even the kings of the yore spend their childhood grooming on the matters of ruling, and even then, needed a ministry of experts to help them. One man cannot know everything, let alone, do everything, and that too at once. I think, a better approach would have been of bringing responsibility for actions to individuals in charge in the democratic system. It would be harsh on a few, but then again, adages like ‘good of the general masses outweighs the good of an individual’ and ‘to save the body, the hand had to be cut off’, can be bandied.

He coats his propaganda with a technique that he claims to have used in spreading his movement in the book too, to say the same thing in different words. So, sometimes, it is the Aryan vs the Jew, sometimes, it is the rest of the world fallen to the Jew vs the German nation. All in all, he tries to convince that the German state would cease to exist if something is not done.

My sense propped up when he talked about India in the later part of his book. While he rigorously maintained that racial purity must be maintained, he predicted two things:

The first part of the book is rich in reason and knowledge, where Hitler explains his ideology, the reasons, consequences and conclusions. The second part is devoted more towards his and his’ party’s struggle to gain support amidst the Red forces. Nevertheless, it too contains valuable insights on how coalitions work, the possibilities of future alliances with England (and not Russia) and Italy.

There is only one thing I can say about this book. Read it, but read it with open eyes. There is essentially one pattern that can easily help you distinguish the propaganda from the well reas oned assertion - the latter is backed by proofs, while the first is just stated, often while talking about quite reasonable things. For example, while explaining the flaws of the German parliamentary system of that time, which had taken inspiration from the British parliament, he accuses the prevalent press as being the ‘Jewish press’ and said that it did not highlight the issues of real concern to the public to sensitize them about what the parliamentarians were up to. In little jibes of slander, he tries to build up his propaganda. It is a long book, and a tiring one too, but a very fascinating one. For those who tell you that the book lies, ‘everybody does’. Know how to separate the means from the ends. I think it would be a very interesting exercise to replace the word ‘Jew’ in this book and then read it again. That would make much more sense.