The Black Swans of Extremistan

'The Black Swan' is Taleb's meditation on the wildly random nature of modern economics and the futility of using prediction models based on the bell curve which treat the highly impactful and the highly improbable as mere outliers. 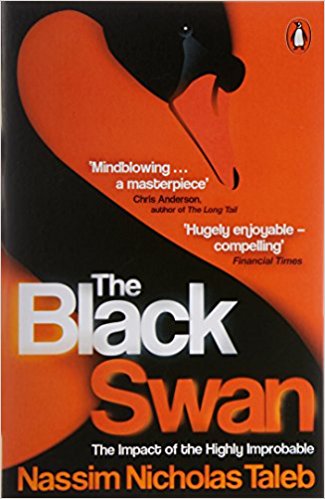 'The Black Swan' is Taleb's meditation on the wildly random nature of modern economics. More than just a meditation, it is a harangue against the use of models rooted in the 'Normal' distribution in places they ought not be used. These prediction models are based on the bell curve which treats the highly impactful and the highly improbable as mere outliers.

The major assertion is that modern economics and modern life are no longer simple or linear organisms but are complex dynamical systems with numerous internal feedback loops. This creates a landscape that has wild variations, and massive inequities, though rare, are no longer unexpected. This is a world where the richest 1% own more than 70% of the world's wealth. This is Extremistan, as opposed to Mediocristan where the averages rule the roost.

The problem is not new, it is a classic Problem of Induction and our belief that with sufficient historical data, we can confidently predict the future. By doing so, we are becoming the turkey which, when fed for the first 1000 days develops an illusion of safety and stability while the butcher sharpens his knife for Thanksgiving which comes on the 1001th day. For the turkey, the first 1000 days cannot predict what is going to happen on 1001th day. This is a Black Swan. The fine point is that it is a Black Swan for the Turkey, and not the Butcher. It is just that looking back into history cannot discover the true generator of events. One, because history tends to hide away the black swans, and two, because we seldom see history as facts, but as a narrative which has a line of reasoning that might be a far cry from the actual chain of events. He slams the Aristotlean 'because' saying "'because' is not there to account for a solid link between two items, but rather...to cater to our hidden weakness for imparting explanations."

As he walks us through the landscapes of Mediocristan and Extremistan, Taleb gently pokes at our psychological biases which create three major maladies which he calls 'the triplet of opacity'.

The author unabashedly displays his scorn for those who tend to dissect the world into categories. This categorization, or platonification, of the world into the known knowns and the known unknowns, while overlooking the possibilities of unknown unknowns (some jargon-speak of Knightian Risk and Knightian Uncertainty) is what he considers to be the cause of much suffering and surprises. Of course, he acknowledges that categorization might be necessary to live in society, but not acknowledging the limits of such categorization and being static is what he objects from.

Categorising is necessary for humans, but it becomes pathological when the category is seen as definitive, preventing people from considering the fuzziness of boundaries, let alone revising their categories.

He laments the sorry state of economics where people resort to applying the old - improper models - even after agreeing to their inapplicability for the want of better models. He lashes out at Nobel laureates like Scholes and Merton, their Portfolio Theory and rigorous mathematics, and is very abrasive in his humour. He compares Robert Merton, Jr., to Locke's Madman - someone "reasoning correctly from erroneous premises." Instead, he bats for the empiricists - those who keep from theorizing and rather depend on observation. He lauds the 'Fat Tony's, eulogizes true erudition, Karl Popper and Henri Poincare, supports the fat and long tails and introduces us to the world of fractals (stuff nature seems to be using in its creation engines) kick-started by Mandelbrot.

Finally, he gives hints about how not to be a 'sucker'. It can simply be put as 'know where you can't afford to be stupid'. Sherlock Holmes claims that "When you have eliminated all which is impossible, then whatever remains, however improbable, must be the truth." But this underplays the requirement of a super-genius omniscience making such decisions. Taleb claims that not everything can be known to us lay people. Despite this uncertainty, we can be sure of what isn't even when we are never too sure of what is. Knowing this beforehand can serve as a useful yardstick. Often, the Black Swan is asymmetric - either the payoffs are disproportionately high should it occur, or the losses are. It is seldom the case that both are of the same magnitude.

Among scattered hints, he advocates a barbell strategy in investing. A large sum in safe places, a small sum in hyper-aggressive bids (that you can afford to lose without being affected too much financially). He implores us to pay attention to mother nature - to not let something become too big that it becomes cancerous, to have redundancy. Incidentally, this reminds me of Scott Page on diversity when the nature of processes is not known, or known to be uncertain (unknown landscape). Diversification. He asserts that one cannot become Black Swan-proof, but can surely take steps towards being Black Swan robust. Taleb defends his stance on uncertainty by refusing to draw up any sort of map of Extremistan. He does not take 'shit happens' as an excuse for being a sucker or the turkey. What he does offer is a four-quadrant map to have some inkling about 'here is where shit happens'.

It is a long essay. Some of it is humorous in a good way, while the rest is humorous only if you are a good sport (because a newly enlightened pig is a pig nevertheless). He describes business meetings as "strange activities" in which "well fed, but sedentary, men voluntarily restrict their blood circulation with an expensive device called a necktie." He imagines how the serious looking academician's face would be like if someone slipped a live rat in his shirt. There are a lot of anecdotes, as he believes that "ideas come and go, stories stay."

The chapter titles and section headings are fancy for a first read. Only after one has read and pondered over them does one realize they can serve as an index. For example, 'How to look for bird poop' is related to accidental discoveries - the one of the cosmic microwave background by two scientists who were cleaning bird poop from the dish antenna to remove noise in their reception.

It is a good read to convince someone to stop taking newspaper stories as reality or from being a data hound. It puts the maxim "don't put all your eggs in one basket" into perspective. But in the end, it is not a very easy read. While the text makes sense and is entertaining for select population, I find it hard to string it into one single coherent piece despite two readings. That, of course, is my failing, for now.