'No matter how mundane some action might appear, keep at it long enough and it becomes a contemplative, even meditative act'. It is in such contemplative mood that the book 'What I talk about when I talk about running' presents itself. Recovering from his runner’s blues, Murakami starts to feel something beginning to stir inside him while preparing for the 2005 New York Marathon. During this process, he ruminates about his life as a runner and as a writer while asserting that writing honestly about himself and writing about running are nearly the same thing. 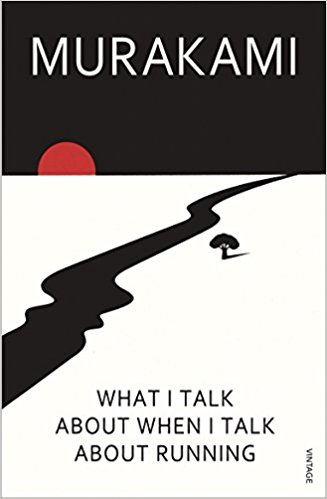 A large number of people who have read or would read this book are Murakami fans who want to know more about their favorite author’s lesser-known personal life. In my case, however, I was looking for a beginner’s memoir on running (when I first read it in October 2016). Despite my antithetical first intention, the simple yet elegant charm in Murakami's work sucked me in (and warranted a second read).

He recounts how the thought of writing a novel first dropped unto him from the sky while spectating a baseball match from its outfield. 'Something flew down from the sky that instant, and whatever it was, I accepted it.' On the contrary, the desire to run long distances came as a natural response to the question of how to keep physically fit. 'If I wanted to have a long life as a novelist, I needed to find a way to keep fit and maintain a healthy weight.'

The way Murakami personifies his body parts as they take center stage and scream out their complaints when running the sixty-mile ultramarathon is both revealing about the travails of long distance running and endearing at the same time. 'You have to expect the knees to want to complain sometimes, to come up with a comment like, “Huffing and puffing down the road’s all well and good, but how about paying attention to me every once in a while? Remember, if we go out on you, we can’t be replaced.” When was the last time I gave my knees any serious thought? As I was pondering this, I started to feel a little remorseful. They are absolutely right.'

It isn’t just the physical part that is hard, running such distances also takes a mental toll. 'At around twenty-three miles I start to hate everything. Enough already!...As these thoughts flit through my mind I gradually start to get angry. Angry at the sheep happily munching grass in an empty lot next to the road, angry at the photographer snapping photos from inside the van. The sound of the shutter grates on my nerves. Who needs this many sheep, anyway?' It is as if every runner develops their own mantra to survive this ordeal - 'pain is inevitable, suffering is optional' or Murakami beginning to deny his human self just to keep at it, 'I’m not a human. I’m a piece of machinery. I don’t need to feel a thing. Just forge on ahead.'

He finds long distance running akin to writing a novel. He discusses a similar kind of toxin that all writers have to come face-to-face with and aware of the danger involved, discover a way to deal with it, because otherwise no creative activity in the real sense can take place. For him, running is not just an activity to keep fit for its own sake, but to keep resisting this toxin. "I run in order to acquire a void." Of course, he talks a lot about writing too, and about things that he thinks shaped him as a writer. An underlying philosophy of doing his best every single time pervades every aspect that he talks about. 'I’m the kind of person who has to totally commit to whatever I do. I just couldn’t do something clever like writing a novel while someone else ran the business. I had to give it everything I had. If I failed, I could accept that. But I knew that if I did things halfheartedly and they didn’t work out, I’d always have regrets.' He talks about being young and talented, and being old and mature - how meanings evolve and new ones emerge as we grow. Lessons, philosophy and running have been so inextricably intertwined that it's hard to talk about one and not think of the other. However, amid all this, I find that his grit eulogizes the human spirit. It certainly isn’t a hero’s tale, but definitely a heroic one.

Simple observations from ordinary life create small joys. For example, during his morning walks, Murakami notices an Indian woman who apparently never repeats her outfits. The curiosity to know what dress she would wear that day serves as a small motivation to go out and run. Or, the camaraderie that Murakami feels with the triathlon athletes or the member of the S&B running team are just everyday things people do. To pick them out of the mundane and place them before the conscious mind is something Murakami has done elegantly.

The prose is so rich in the use of metaphors and similes that it is palpable. What do you get when you run? Tiredness. Do more of it, you are exhausted. But what lies beyond that? Murakami’s thighs feel like old hard rubber as they start to stiffen, and end up feeling like a week old cafeteria bread while he feels like a piece of beef being run down, slowly, through a meat grinder. Maybe it is because the original book was written in Japanese and that Japanese is rich in this kind of expression, but I found it to be very appealing. Other than that, the translation extensively uses short forms - I’ll, I’d, He’d etc.. I had some trouble with the commas as they were used sparingly in most of the text.

He undertook this project because he wanted to sort out what kind of life he’s led, both as a novelist and as an ordinary person. In this process, he has let his readers benefit from his share of experiences. It is a short book, full of experiences of a person. To be very honest, it is an exquisite exemplar of how chit-chat is: One thing leads to another, casually.