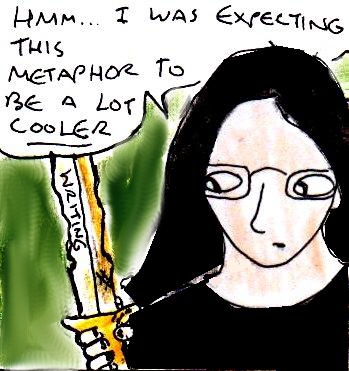 I recently read a tweet from one of my friends, “Grammar God is abandoning me. How do I get absolved of my sins?” and I sat thinking: this line needs something - a variation, perhaps!

“Grammar God is abandoning me. How do I absolve myself from my sins?”

I kept quiet anyway. There’s nothing wrong with that. It is just a matter of taste and situation, and I’m just trying to write an introduction here anyway.

I grow weary of typing these days. There is something which is so un-novel about typing. Perhaps it is the typing all day long. Many times, I’ve started off with a pen and paper, and I’ve also tried to maintain a journal. But at the end of the day, that too needs to be typed into the computer for keepsake. I even bought a digital pen and a handwriting to text software to satiate my fingers, but my fingers can’t really keep up with my mind. For the want of practice, they’ve really lost stamina. My mind cannot keep up with my tongue, but that can be taken care of...right? So, I hired a nuanced dragon on trial basis and trained it to take dictation. All is fine, but it does mess up a lot in some words given my accent. For example, ‘too’, ‘to’ and ‘two’. And my hysteresis makes it really tough for me to proofread myself since the flow hasn’t broken and I read what I meant to write rather than what was actually typed (unless the dragon did a real lousy job like a Komodo dragon). So, what is the remedy for this malady of typos and grammatical errors and goof ups other than proof-reading it after, perhaps a week?

About two weeks ago, I was suggested this nifty app called Grammarly via email (along with an offer to two weeks premium preview). It purported proof-reading my drafts on the fly and suggesting grammatical errors rather than just spelling mistakes as is done by MS Word (I don’t think LibreOffice does that any better). Now before that, I hadn’t even heard of Grammarly and not even noticed that my Facebook wall had always contained an advert of this app with many of my friends’ likes endorsing it. It piqued my interest and since it offers a free Google Chrome plugin, I installed the plugin to try it out. After dabbling with it for about two days and being impressed by it on various accounts, I ceded to the temptation of checking out the full suite. I had promised the sender of the email that I will not blindly endorse anything which I haven’t tested but should I like it and find it useful, they’ll have my support (this blog post).

So, what did it teach me about my writing? I use far too many commas. Dropping some commas into coma is suggested. And I will try. It also suggested that I am prone to writing too long sentences. But having read one essay by Max Muller in one of my school books, I don’t think I’ll listen to a machine telling me to disrupt my thought stream with full stops (even though the code has been created to follow the lexical rules for grammar writing by humans).

You don’t have to do much other than enabling the addon and it starts monitoring most of the places you could write in your browser window (except the address bar, of course). It shows errors with the conventional red jagged lines underneath the erroneous text like we are used to seeing. What’s an improvement on top of that is that we don’t have to right click on the text to see suggestions, it shows the problem and if possible, suggestions, when we hover on top of it.

‘Recommended to whom?’ you may ask. To everybody who writes on the web! From Facebook updates to Tweets, to blog posts, to comments, anything, everything. But if you earn by writing in some form or the other, this is definitely a good tool to have in your tool belt. A survey of about 450 freelancers from 9 categories on elance was conducted to find out a possible correlation between payouts and the number of errors freelancers made while writing. The results are shown in this elegant infographic below:

The main result must not be surprising, for it primarily aimed at ‘Freelancers’ and how they sell themselves, which is predominantly in some textual form or the other on these online platforms. So, the corollary goes like, the better you write, the better are your prospects of landing a job. Whether it is resume writing, or writing a design proposal:

Now, why is it better to let it be your handy companion rather than excitedly hopping on to the editor’s, or beta-reader’s office after completing the first draft? I have personal reasons. I’d prefer a non-human being impromptu in offering improvements and pointing out my errors than a human because I can trust a machine to be unemotional. Plus, because I know it is a machine, I wouldn’t call it a nagging shrew. If I am offended by its assiduous correction-offering help, I can turn it off. You can’t turn off people without offending them. Sure you CAN be a turn-off and that too is a catch-22 situation. In any case, the time and effort required in turning them back on can range from a few minutes to an entire lifetime. Net result? lost opportunities!

I’d like to see a mobile version of this unique app, but since it works in online mode (only in web browsers), and offline version would take a lot of effort to integrate with every other app, I guess I’ll have to wait.

On the technical front (since I too am a developer), there are a few improvements that I’d suggest.

All in all, a very good app!

P.S.: In the two versions of that tweet, I find one small, but subtle difference actually. In the original one, the emotion is of submission, of being a receiver of absolution; In the second, one takes the responsibility of absolving oneself. First is ‘getting absolved’, the second is ‘absolving myself’.