Routine as an antidote to binging arising out of boredom

I read somewhere that you should watch what goes down your food pipe and when. Do you snack frequently because you're hungry, or ... just bored?

I sometimes eat just because I have nothing else to do - or that I don't have the energy or mood to do those more important things. Eating is easy. What do I eat? Snacks and biscuits - no one can eat just once! Sometimes, I watch a movie. In my office, I drink coffee during breaks more ritualistically than from want while wandering on the floor to time the return to my seat. I haven't yet fully given up on facebook either. Up until some time ago, facebook used to feed me clips and AMVs from Naruto. I watched them mostly for nostalgic reasons. I had consumed it in great quantities - quickly moving from English dubs to English subs to Manga for the want of knowing the latest happenings. Each Wednesday a new Manga used to be released and I devoured it on the same day. One video is harmless, but by the end of the first, pop goes the second suggestion, equally appetizing if not more, and down I go the rabbit hole. Somehow, facebook moved on from Naruto to a combination of WWE and Dragon Ballz feeds. Again, citing nostalgia as a reason, I watched them. I had watched the DragonBallZ Bu saga on a borrowed laptop in my first year of college in a single night. That's the only all-nighter I ever did in my life. Facebook switched gears yet again and started to pop up Friends' clips. These days, it shows me clips from the Big Bang Theory.

That reminds me of the entire seasons that my friends loaded up in my hard disc half a decade ago in case I felt like joining the Friends or BBT fan club. They thought it would be a good idea since I had already memorized that 'little kitty, warm kitty, little ball of fur' poem without even knowing what its origins were. I didn't spare a second thought on that. Now, I think I might. There is this small problem, however. If I have it all, it is hard for me to take it slow. I'll binge on it. (I don't really like EMIs either.) But I am not very fond of binging even when I end up doing just that. During my first year at the job, when I was also trying to prepare for some competitive exams also, a friend had suggested that I try out this new show named 'Suits'. It had just completed its first season run successfully. I watched all the episodes in 3 days (after office). Back in my college days, during vacations, I had watched the entire Avatar - The Last Airbender animation series within a span of a week or so, much to my mother's chagrin and ire. Then there is gaming. While hostels were a haven for LAN gaming, I binged on solo games like Far Cry 3 during my vacations. Then there was (is) this Assassin's Creed series - that didn't even need vacations. These are just fond remembrances of an entire quagmire of binged activities. But this aversion or fear of binging also bears witness to so many opportunities let go which cannot be caught up with now without...binging! And what for? Such entertainment only enervates the already tired brain! But! 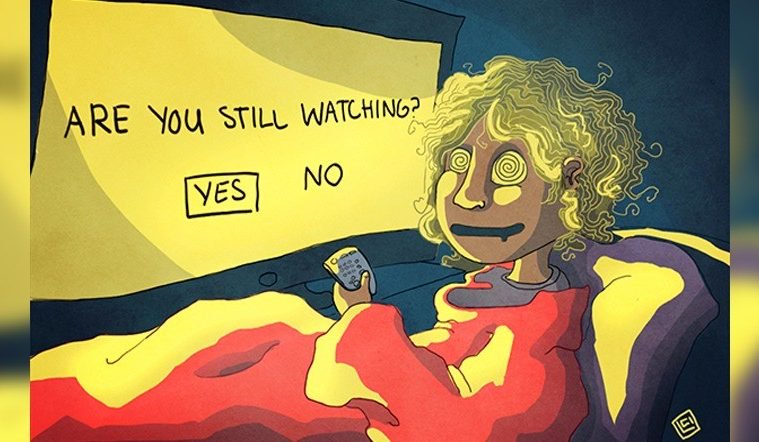 My gut stopped telling me its feelings at all. My eyes tell me binging isn't good but the blue light of the screens have already sucked me in. My mind accuses me of not delving on those unread books and spending time with their half-retarded foster sister - the multimedia screen - instead. It reminds me of the days when I used to steal time to read. I need to up my zen game! The answer, it seems to me, lies in incorporating 'wasting time' into a schedule.

It occurred to me one day while returning from office. The building's keeper was lying on his cot with his left arm outstretched over his head and holding the mobile phone as it streamed some television serial over the internet. Looking at him sprawled like this, my first thought was, "doesn't it get uncomfortable, holding that posture for long durations? I get tired and crampy. Above all, why take all this pain for a silly soap opera! Why do people engage in this form of recreation that teaches them little?" (This reminds me of an idea that while scoffing at those actively indulging in activities we consider sub-par to our standards, we fail to see someone higher up scoffing at us.)

The next thought was semi-enlightening. Schedule! Keeps away the 'binge inducing' boredom, because one might be able to avert such boredom with the sweet anticipation of the next scheduled item. Having a fixed set of shows to catch up on possibly helps avert the anxiety of not having good enough stuff to pass time - no trusted fallback option. The feeling of discontent that often arises when one is prone to not having a brain-wise economical (read: cheap) source of entertainment in life can be a symptom of mental exhaustion or mere boredom from the 'interesting' things in life (and of course, lack of company). In such scenarios, it would be good to have something easy and anticipated coming up real soon. Possibly, it also makes us more effective at what we do because the scheduled item may be seen as a reward. Of course, for a mind heavily bent on being most productive, this method might seem like penny-wise and dollar-foolish. Though this be madness, yet there is method in 't. And! It can always be overdone.

I have forever been in a quandary - and for that - I've always alternated between making a routine and tearing it apart. I seem to get bored of a pattern quickly, but haven't quite gotten bored of this pattern of patterns. For now, I've started to consume Boruto episodes that release every Thursday. I like my face when I tune into the latest episode. I've replaced most snacks with roasted and lightly salted seeds and nuts (I like them but they can't really be binged on). I've shifted to green tea as my timing instrument - and when I run out of it, I use hot water. And so far, I have kept a leisurely pace in the latest Assasin's Creed offering - Origins. I hope to complete it by the year-end. Let's see where this takes me.