I see I haven't been posting much here, much against the objective of this section, to share everything new I learn in my day to day life. This might be because I'm revising more than learning. Not really, but sometimes, just sometimes, my sense of wonder goes on vacations. Anyhow, lets push ahead! 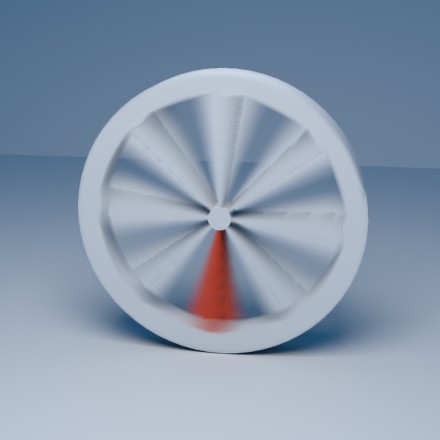 The other day while I was returning from office, I happened to notice how the spokes of hubcaps on wheels of fast moving cars produce a different sense of rotation, a false sense of slower rotation. This is a normal observation, but I wonder why I didn't wonder about it before. We all know that the wheels are anything but slow should our inquisition hasten us into judging otherwise and try to put out fingers to mercilessly prove ourselves wrong. But I did wonder about it now, and I tried to find out. It is called the wagon-wheel effect and sometimes even leads to reverse rotation effect. In any case, it is an optical illusion. It is a common phenomenon when we're looking at such recordings from a camera which is because of the frame rate. Cameras (SD ones) usually record at 24fps. Though what we see in real life isn't exactly the same thing we see in the movies (as I read, there are primarily two schools of opinion on this). The one that we see in recordings, or under stroboscopic conditions is explained quite simply. For that, know that the persistence of vision of our eye is approximately 1/16th of a second. Thus, if a single spoke moves in such a way that by the time our eye takes the next photograph of the scene, it is exactly in the place where some other spoke was, we will get an illusion that the spokes haven't moved. If it moves a greater distance, it would give us an impression of moving forward, albeit at a rate slower than the outer wheel and if it moves a smaller distance, it gives an impression of backward rotation. Greater the speed, more pronounced is the effect. Why is it with respect to the wheel rims, because we don't see separable parts in a wheel; it is one continuous curve, while the hub is not, so we observe the continuity of motion in case of the wheel. Well, this explains the entire phenomenon partially. (Sometimes I love Wikipedia for the balance of arguments that it presents) Here, like the video below, it does not explain why the same effect is observed in continuous lighting. So, as I said, I learnt that there are two schools of thought. The first one, which also explains the stroboscopic effects is called the Discrete Frames Theory, while the other one is called 'Temporal Aliasing Theory' which tries to explain why we begin to see these effects only after some time as elapsed and also why we observe different sense of rotations in different parts of the same scene. It is attributed to the presence of Reichardt Detectors which are like micro-circuits which infer motion by perceiving change in luminance based on phase shifts in own and adjacent cells. I think it is the similar to phase based interferometry that is utilized widely in remote sensing field (I used it for Synthetic Aperture Radar imagery). The rivalry between the detectors claiming the motion to be forward, or backward leads us to perceive different sense of rotations. BTW, eyes ARE doing remote sensing.

Also, I learnt today that the problem which I once described in a post about what I want of tablets, of distinguishing between a finger or pen touch and the touch of an entire palm has a self describing name. It is called Palm Rejection. Sounds obvious now, but I didn't know till today morning. The internet describes it as follows:

Palm rejection refers to a touch screen’s ability to “reject” or ignore the presence of a palm during the process of drawing or signature capture. Palm rejection capabilities allows for accurate on-screen drawing and for capturing of a more accurate signature.

There are a few questions I am yet to find a satisfactory answer, to find which, I think I must pick up my dusty physics (mechanics) books again. For example, why does the car steering swerve to a side when let free on a highway, but a bike handle bar doesn't. If you can answer this, or have a good link where I can find out, do let me know :-)