While replying to Purba's comment of marking own territory, I was reminded of Dan Brown's novel (Deception Point) and the escapade where the guy (Corky) urinated on his bleeding leg (wound in duct tape) to mark his territory midst sharks in the sea. Immediately the question came, are sharks attracted to human blood?

Anyways, Sharks do have very sharp sensors with which they can know where food is, but there is no conclusive evidence that Sharks are attracted to human blood, as is projected in 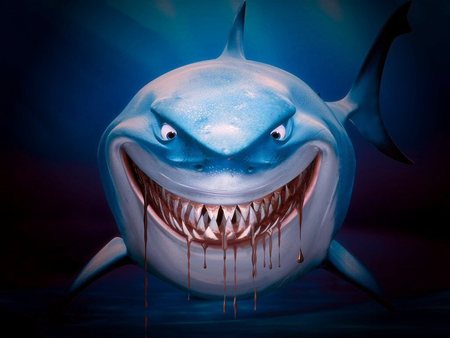 many movies where sharks play the badass. They might be able to sense coke from as much distance, or maybe more. This interesting post which is more empirical where experience talks and not science also claims that the sharks (like tigers) will refrain from attacking if we confront them, chances are they'll share their mea with you. Talk of facing your fears. Yet, if it is a Bull Shark, you probably have no chance unless you are a bigger bull shark or it is really happy to see you come as guest and not as dinner (yes fellas, they do have such kind of hierarchy!). By the way, does anyone know how can we scream inside water because sharks are really curious fishes? As for the question that they take human blood for food or not, it is advised to stay safe than being sorry.

2. This way of passing values to structures looks more chic (more OOPs like, okay, who am I fooling, I don't know OOPs. Only the bare minimum). I've written a whole new post for that (here), but here is the method in short:

3. Linking woes in C: If declarations in library A depend on definitions in library B, then while writing Makefiles, the sequence of linking is -lA -lB and not the other way round (the way the source files are written).