A quick wrapup of how much I walked, how often I walked and how well I met my fitness goals in 2018.

A few hours later, the scene from Ban Drown's thriller unfolds with Landgon running for his life from Spanish Royal guards with a firm determination to bring the killers of his beloved student - Headmond - to justice. Coincidentally, this happens at the time when Headmond was about to reveal the path-breaking "answer to life, the universe, and everything" (which is 42, in case you didn't know). Anyhow, he does a lot of running around, loses all his flab acquired from sitting long hours working on symbology in Hazard University. He finally figures everything out by himself only to realize that the entire plot was contrived by the AI agent Winston in connivance with Landgon's Google mini to achieve the wishes of their masters - massively publicizing Headmond's event for Winston and making Landgon fit from all the running about for Mini.

Too dystopian a view of how a Smart Home device can go the distance to do its master's bidding? Well, the jury on ethics is still out. And while it is out, let us mellow down to something more personal.

A few years ago, I had a realization that I need to work on my well being. Since my work is mostly sedentary, I had to find ways of being more active. But without any feedback, it becomes easy to be lax and fall victim to a false sense of security of having done enough. "In God we trust, rest bring data" was the motto I adopted where-ever I could. For a long time, I wore a pedometer on my belt with the obvious flaw that it measured nothing when I didn't wear the belt. Also, logging the data manually was/is a menial job. Of course, I automated a lot of that - like firing up applications that would let me make entries at particular times of days, but not having to do that, thanks to the technology getting better is really a way forward to geek utopia.

About the same time, smartphones happened; and then, online platforms like Flipkart popularized Smart Wearables like MiBand, Fitbit and Garmin. With them came the ease of setting health-related goals and getting regular feedback on how I'm doing. Of course, motivation is for those who want to take it. But, I did some data crunching on the past year's fitness data from my fitness band and some of it is shown in the infographic below.

I had set some targets and on an average - for example, walking at least 8000 steps daily- and on an average, met them! As is seen in the graph, most of my walking gets done in three chunks - morning (to office), afternoon (after lunch) and evening (from office to home). But this data also revealed that I did not move enough on weekends when I am mostly found idling in bed. With this growing array of smart devices, this data crunching has become a lot easier. What I needed to collate from different places earlier, I can now see them in a more-or-less unified manner. Also, these are helping me get more active - even on weekends. For example, my band nudges me to move through vibration alerts if I am inactive for more than an hour. Periodic sampling of the heart rate (and lately VO2 Max) also gives some glimpse of body parameters and overall fitness. Plus, for those who like to compete, networked apps of these smart wearables also reveal our standing among other users through gamification of activities. This helps goal setting and slowly turning the ratchet upwards. 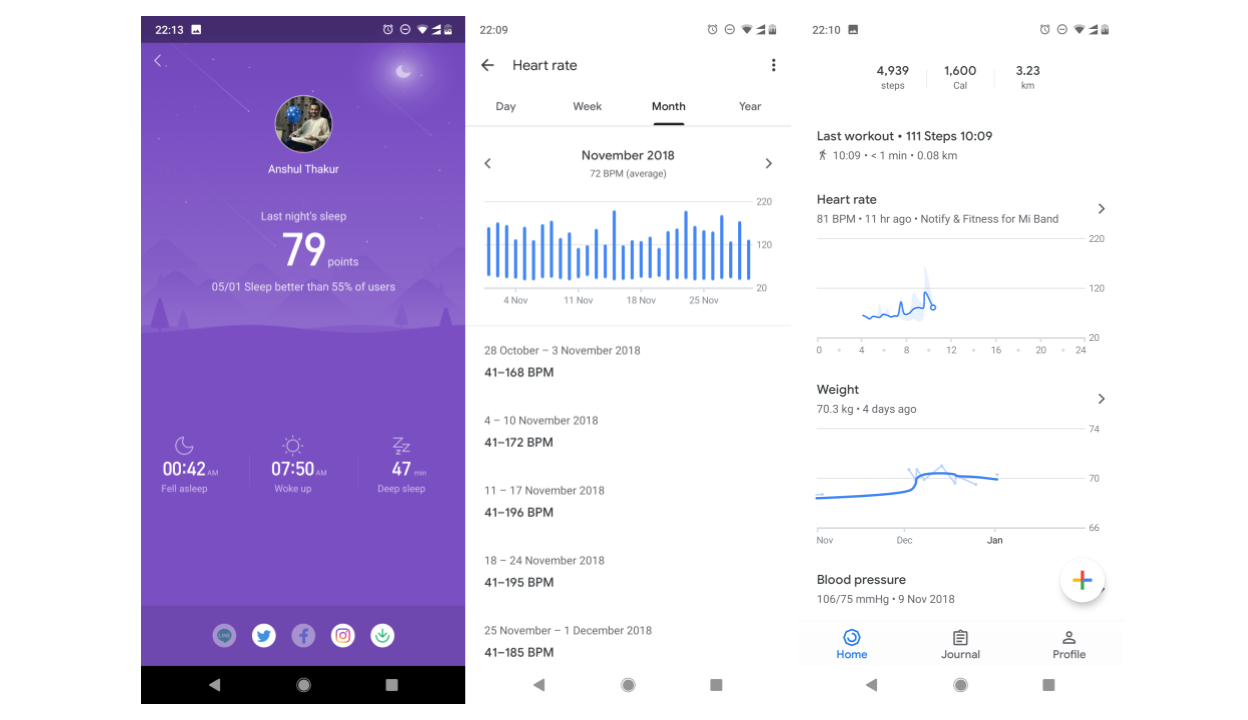 Apart from their apparent physical wellbeing related features, these devices are also helping me cut down distractions. Vocal interruptions are a vexation to my mind, so, my cell phone is mostly mute now. In this era of constant bombardment with pick-me-up distractions, my phone disappears from my mental landscape until an urgent call arrives. One of the smart devices alerts me then. That is also particularly helpful when I am walking or running and the phone sound would otherwise be muffled in my pocket.

On the home scene too, 'OK Google' is becoming the express route of getting quick information and performing basic inventory management. One, I can ask it to make reminders to buy stuff or setting appointment schedules or start calls (and with more innovation, even make appointments too). Or, I can ask it to "tell me a joke" and take solace that there exists someone who tells worse PJs than myself (just kidding, I don't tell jokes. I just play practical jokes). With more products like Smart Lights integrating their solutions with Google Home solutions, the homes are on their way to becoming smarter. I would really love to program the lights to toggle on my clap - it would give a feeling of Nawabi royalty where things would be getting done by one clap.

I can already see a smarter future and greater penetration of such devices in our homes and lifestyles. Apple is working on tracking blood pressure through its watch which could significantly improve the healthcare of people requiring regular monitoring. I think all these inventions and innovations are wonderful. Non-invasive sugar monitoring? I am hoping it will help get better compliance and lifestyle management for people at risk. At home, a small intelligent device could cut down bills and energy consumption. Imagine asking your autonomous car to call up your home and asking it to turn on the air purifier and conditioning so that the house is just right by the time you get there. You get home and a smart camera opens the locks for you to enter and close them behind you. It also maintains vigil to ensure that the Zomato guy doesn't sample your food while you aren't looking.

A networked system of smart devices stands to serve you and enhance your well being. And add a dash of humour to it, one might grow to enjoy the occasional banter too. Though that would be a bit of a stretch for now. People were already a bit freaked out when Alexa started laughing hysterically. But health technology and smart homes are here to stay. I have been positively impacted by its presence in my life and I hope, millions of Indians will find enough motivation to bolster their health by incorporating tech into their lives.

P.S.: This is a participation entry for the Indiblogger contest #GetFitWithFlipkart and #SmartHomeRevolution .