Lockdown amid the Covid-19 crisis has been in force for more than 40 days in India. No one goes no where. A few days ago, it was a friend's (also an ex-flatmate) birthday. His wife reached out to her people to wish him differently since no one could come and go. Us included. We thought of new ways to do that because we couldn't be there. We friends created something piecewise so that it might fit as a whole later.

Yesterday, it was my parents' marriage anniversary. One of my maasi recorded mausaji singing a song on marriage and dedicated that to my parents on the Whatsapp group. My Bhabhi (sister-in-law) had her exam and yet, uploaded pics from another anniversary where they were all together to commemorate the occasion. Another maasi who recently learned how to use WhatsApp pulled out those old albums and took pics of the pictures from the wedding day and put them on Whatsapp status. Wishes poured in on the family group. I was inspired to draw something for my parents - the quality notwithstanding (not this image below). Yesterday, I celebrated my parents' marriage anniversary! 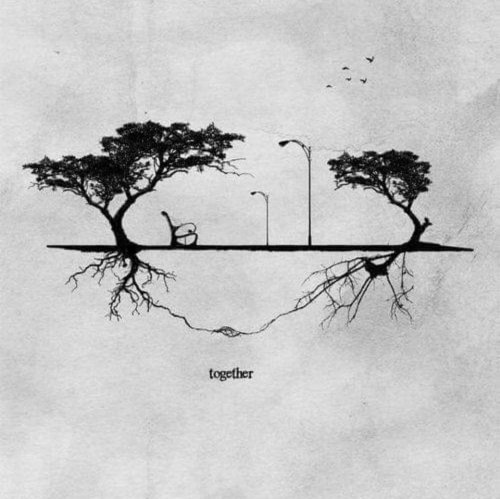 Something unique has happened in this crisis! Something climactic - this realization! - It happened for me yesterday. Pardon me if I invoke a love poem (translation of a Faiz's poem), but I am, if not anything else, in love - to be able to see this.

Before you came things were just what they were:
the road precisely a road, the horizon fixed,
the limit of what could be seen,
a glass of wine was no more than a glass of wine.

Had I been at home, I would have wished them in the morning, maybe I would have bought a 'thoughtful' gift and that would be it. Ma would have asked 'kya khaoge' (what will you have), and maybe we would have asked for something like 'kuch bhi' (anything). I don't think I would have drawn anything. Maybe maasi and mausaji would have been prepared and gone to their respective vocations and living their routines, just a phone call would have happened. Or, the wishes on the WhatsApp group and a call.

Had this lockdown not been in place, the friend's birthday would have been just that old... birthday. Those who could make it would be there in person, and there would be a small treat. Maybe people would go out to a nice restaurant and eat fancy food and share drinks. Others would call, say happy birthday, and be done with it. The custom of birthday bumps fizzled out as people fanned out. Now, even smearing the cake is not done much - particularly when the cake is tasty.

With you the world took on the spectrum
radiating from my heart: your eyes gold
as they open to me, slate the color
that falls each time I lost all hope.

With your advent roses burst into flame:
you were the artist of dried-up leaves, sorceress
who flicked her wrist to change dust into soot.
You lacquered the night black.

I look back on what nanaji did to create this pause in his life for his people. His birthday and his marriage anniversary were days of celebration. All his daughters and their families would come together, the men would prepare an elaborate lunch in the open kitchen, and women would make tea. Children would play, and talk, and run around. After food, some men would be playing cards, some would be taking a siesta. Women and other people would talk and relax. These were two milestones in a year sufficiently spaced out. These were two milestones where one took time off everything else. That is what festivities do - a reason to pause. He never forced anyone to come. Daughters came because they wanted to. Kids, when we were kids, came because there would be other kids too. If someone could not make it due to any reason, they were missed. It might have been a decadent process - grandkids grew up and went to far off places to study, they could not come many times. They have a job and a day off isn't possible. But it did not stop the celebrations, and a lot of people always showed up. Those who couldn't, they called - and most made efforts to make it the next time. He never bound anybody, and yet, bound everyone freely. Now, he's gone. But this social aspect is not lost on a lot. Some are just late to the party.

As for the sky, the road, the cup of wine:
one was my tear-drenched shirt,
the other an aching nerve,
the third a mirror that never reflected the same thing.

This Lockdown won't last either. Chances are, it might change how we live. But fundamentally, it will only amplify what already existed. Those who mattered will matter more; Those who didn't will matter no more!

Now you are here again—stay with me.
This time things will fall into place;
the road can be the road,
the sky nothing but sky;
the glass of wine, as it should be, the glass of wine.

If I am to be brutally honest, here's a hat tip to a lot of ladies in my life. I don't think a lot of them are going to be reading this, or reading this far, so I am safe, but I'll still avoid names. You'll know who you are :). My room and flatmates might have ceased to grow beyond just friendships into more family-like conviviality had it not been their wives. (For those who haven't, I am sorry.) Birds of a feather, I guess - our (guy) dynamics are a bit different. But these new people, these ladies have kept the chatter going in more than one way. Had she (the one mentioned before) not explicitly asked for a different kind of wish, we would have just been that old - rumble and tumble. To you! There's another, who has fed me so many nice dishes by inviting me again and again and looking out for me. To you! Then, there's my bhabhi, because of who I was inspired to make the sketch in the first place. To you! To you who sent me that first notepad which HAD to be sketched upon! To you, who tempered and hammered me enough and has shown how to deal with my priest when the poet is who I should be listening to at the moment - you're not my mother, oh well, but you know how it is. To you, whom I have not yet drawn on paper but is enough inspiration to want to improve myself. You all are wonderful! You did not come into my life through familial bonds, and yet, here we are. I am reminded of this line from a chapter by Premchand from school days - "बड़े घर की बेटियां ऐसी ही होती हैं"!