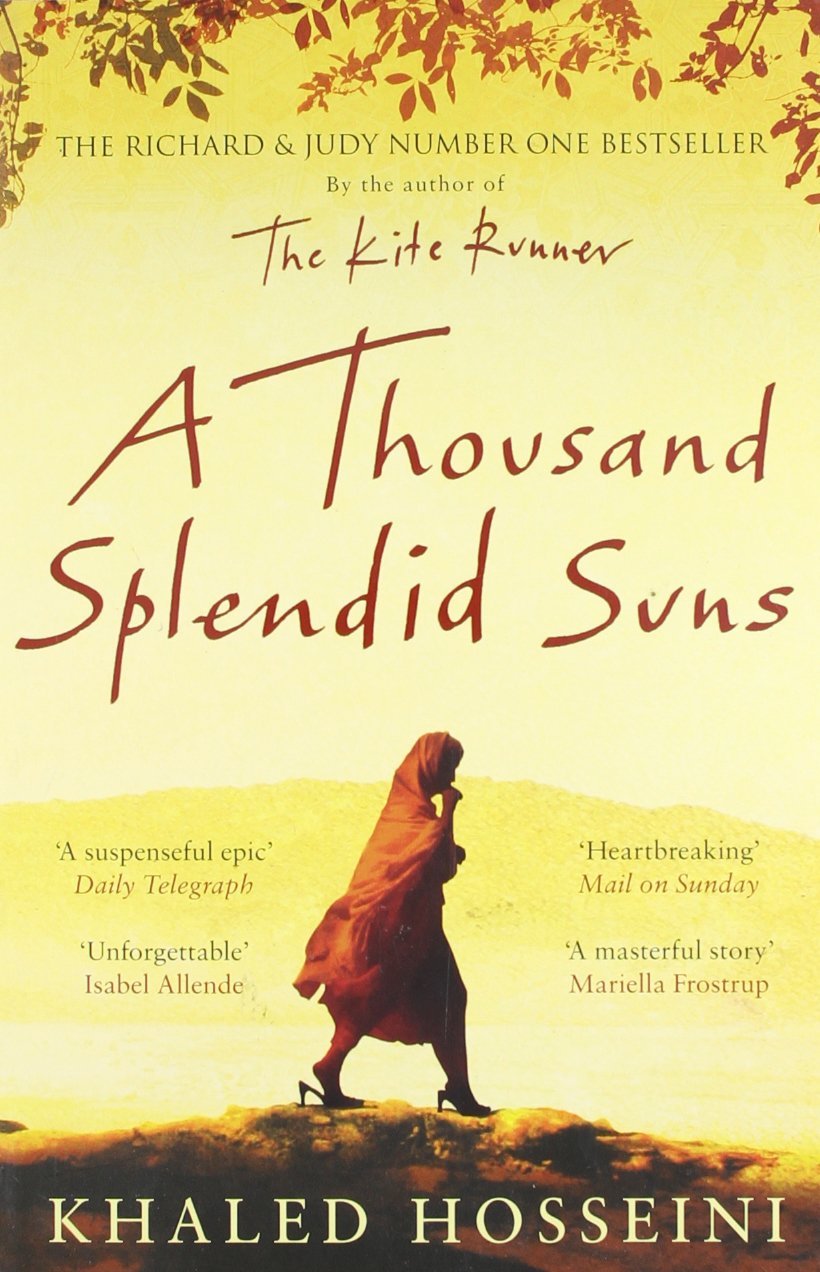 ‘A Thousand Splendid Suns’ is Khaled Hosseini’s second book. He takes us back to the time when the last monarchy of Afghanistan had fallen in the form of King Zahir Shah, and the tumultuous times had just begun. The story starts off in Herat, where there was once a time that one “couldn’t stretch a leg without poking a poet in the ass”. This is what Jalil had told Mariam, his illegitimate daughter to a housemaid, about the city. She had been brought up in a small shack secluded from town and had never visited the town since the past 15 years, since birth.

It is a story of how control passed from the educated liberals like Babi who believed that the emancipation of Afghanistan resided in the education of its girls (one of the few things that communists did right according to Babi), to close-headed conservatives like Rasheed, who did not hesitate one bit while resorting to vile means, who treated women like trash as if they were mere vessels into which Rasheed could spit his lust. Unmatched marriages, of girls as young as 14 to suitors as old as 40, the stubborn desire to have a male child (but thankfully the acceptance of the little one no matter how unwelcome in contrast to some places in India where female foeticide… well let’s not talk about it here), the disappointment and the mudslinging, the parched nature of dysfunctional relationships and how “like a compass needle that points north, a man’s accusing finger always finds a woman.” There will be more than one occasion when the reader will be reminded of this, each one more harrowing than the previous. But no, that isn’t all, there is love, beautiful and crazy, teenage love, bubbling in the corners of a violent city amidst rockets and the shelling; and also love that has ripened through seasons and a love that sees the heart, not the body. It is also a story of compassion, of a sense of camaraderie between two women Mariam and Laila - a love bond that makes them do things way beyond imagination. Aziza, whose innocence melts the rock inside Mariam, oh it is beautiful! The entire story smells of sacrifices made by women for everybody in general.

At the heart of it, ‘A Thousand Splendid Suns’ is a story about women, about the downtrodden Nana, the innocent Mariam, the naïve Laila, Mariam and Laila and of course Aziza. It is life through three generations. It is a sorry story. But it is adequately paced, and not disconnected. There are a few occasions where the author seems to have relaxed the restraint on his imagination a little too much and made the emotions a little film-like, but in circumspect, they don’t bother the reader too much.

This book might be, in many ways a story of Afghanistan through the life and hard times of a few people; it is stretched over three treacherous decades, from the advent of the Soviet, to the fall of communism by the ‘Jihad’ on Mujahedeens’ part; from a betrayal where brothers in arms turned the guns on each other for the lack of a common enemy, the meteoric rise of Taliban from the Afghan refugee camps on Pakistan border, and its eventual defeat at America’s behest post 9/11 attacks. Moreover it is a story of the plight of women, of how the ardent and blind followers of a religion destroyed a nation and put it in a cycle of devastation, upheaval and tyranny for at least three decades. A nation where women would not be allowed to move freely, would have to wear a ‘burqa’ if they had to step out, and would be beaten black and blue, by other men, if they were found in the streets without a male relative. Imagine a land where you call a woman ‘Hamshireh’, a sister, and backstab her when she’s trying to flee from the country and asks you for help. Where a woman fleeing from her brutal husband is a crime under state law, but what the husband does to his wife is the husband’s personal matter; where if a wife kills her tyrant husband, she’d receive a bullet in her head, or will be hanged, that too in public, but is okay for the husband to strangle his wife, to skin her with the buckle of his belt and to toss his new born girl child and the mother in a boiling hot room without water for a long time. Imagine what the women of Afghanistan have been through in the past 30 years (now it would be 40, but hopefully the conditions might have improved a tad bit). No, don’t imagine, read this book. The book doesn’t tell you this, it walks you through the scenes with a handful of characters.

I read the book “And the Mountains Echoed” first, and I have been reading Khaled Hosseini in reverse chronological order. While it is undoubtedly clear he is a gifted storyteller I cannot help but compare these two works against each other. While the previous one was heart-rending and beautiful, this one is more lifelike. ‘And the Mountains Echoed’ had left a bad taste in my mouth for at least the next few days; this one is a much more faithful representation of how life proceeds for fairly all of us. In ‘A thousand splendid suns’, there is pain, and then there is pleasure. Every time, we will forget the previous part – like the angst of Mariam for her mother Nana, her revulsion for Jalil; like Zalmai’s affection for Rasheed, like the golden old days of Afghanistan’s glory and the days of horror – we will forget it. And every time we think that everything is all right, we will only be proved wrong so that our will be tested; as the Koran says “Blessed is He in Whose hand is the kingdom, and He Who has power over all things, Who created death and life that He may try you”. I like the way all of His’ is capitalized. Through all this rife and tribulation, all this anger and war and misery, like a faint silver lining in the black clouds, something always shines through – It is the continuity of life, no matter what. That is what I found to be the essence of the plot.

Overall, a very readable story, and as I said before, very lifelike.

As is customary with such books, I am seldom done talking in a small post. So if you've found some connect while reading this review, I suggest you also read the discussion of the book. Here.