Once upon an early morning when I went jogging

I've often flirted with the idea of becoming an early morning person. The need has been more pressing of late. The world often intrudes into my evenings and infuses its disquiet or the travails of the day have spent me enough that I find little energy to finally sit down and not sleep. More so, I'd want to jog a little, if not run a lot, and the evenings in the metropolitan are a health hazard. So, early morning is an interesting option. A large part of the world is still sleeping and nature has repaired itself a little bit over the night. Above all, no one can intrude like in the evenings. Or so I thought. So, I gave it a shot. These are approximately the minutiae of 60 minutes and another half hour, and I haven't cared to filter them out... 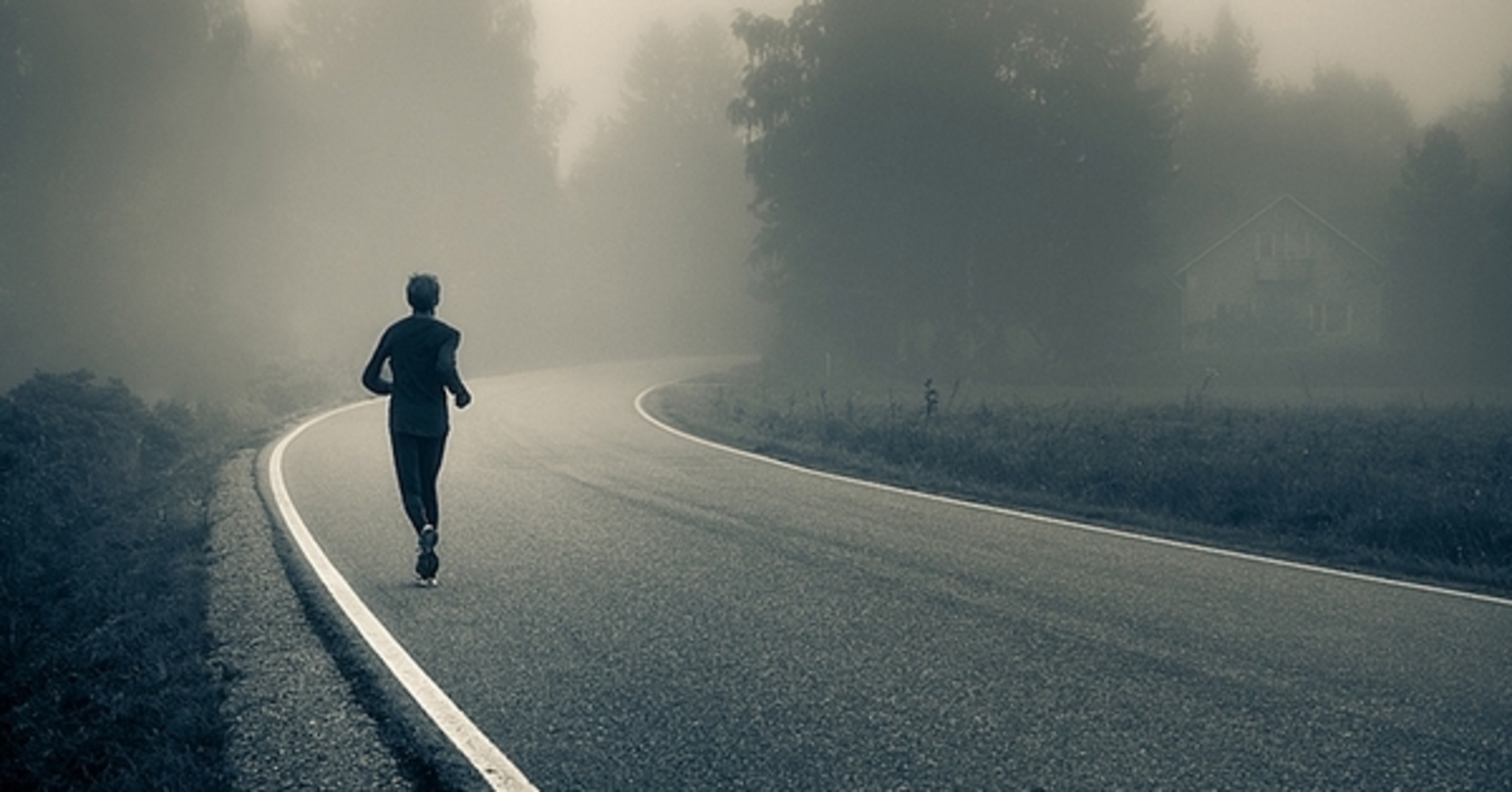 The planning started on the night before. I got in bed by 10:30pm, and for the first time in many years, set an alarm - for 5:15am. I was soon asleep.

My head remembers that I wanted to wake up by 5:15, and I think I am awake and it is still 5. I don't check the clock though. I drift into sleep until the alarm goes off. 5:15, I get out of bed. The day is still in its nascent state - barely dark, and barely lit - dawn is on the verge of breaking.

I drink some water, put my shoes on and head out. The caretaker has been up and cleaning cars. He wishes me a cheery good morning. I return the greeting and wonder that he is up really early and working (like people in villages do). A corpulent old age lady is walking her small dog. As I pass her by, the dog seems to try and climb up my leg. I pause, pat it lightly on its forehead and it licks my hand. Maybe, the next time I'll scratch its neck. Somehow, I feel welcome into the new morning. The lady didn't seem to mind. I think dog owners feel happier when strangers, instead of shying away warily - fearing that the dog might bite - accept it and play for a while (under their watch). I wouldn't mind if people patted my dog, but they mostly ask, "kaat-ta to nahi hai?" (does he bite?). I've made a habit of telling them - "depends on his mood" - even when my dog is disinterested in even sniffing them.

The traffic is mild, mostly heavy trucks whose movement on city roads would be halted for the day in a few hours. Some dust is up in the air. I suddenly remember faintly that there might have been a report of pollution being higher in the morning hours. Or maybe it was something else and I am falsely correlating it with the mild disappointment that I didn't find the world peacefully sleeping and quiet even at 5:30. Try 4:30, my head suggests, I let the thought drift out. The flower market is getting ready near the traffic light. It is already a traffic jam in making. I hope that the park would be empty and am looking forward to reaching it. I break into a jog midway, and then remember not to injure myself by overdoing it and scraping my ITB. Then, I run till the park entrance.

The park is mostly empty. Moving along the trail, I find that middle and old aged men have occupied the open air gym and are swinging/exercising on them. Quite a few, the park isn't empty - but most of it is. It is quiet. Soon, cliques of mat carrying (retired) men would flock to the greener slopes and do yoga and laughter sessions. I remember my friend telling me that the detour trail had now been fixed. So, I take that detour. It increases the length of the trail by a few hundred meters. It is away from the main trail, shrouded by vegetation and still dark in most areas, unlit by the DDA park lamps that sparsely line the main trail. There is a half fallen tree on the trail. In the lack of lighting and people, I wonder if I would accidentally step on a snake which was out for a morning crawl, or a pile of poop, with no one to see it happen (the first scenario is comforting, the second one, not so much). I am not carrying my phone, so I cannot call for help if I needed it. But objects in pockets are a hassle to running anyway. Well, the snake would most likely crawl away beforehand after sensing approaching footsteps, I think. And stepping on poop is, well, okay. It can be cleaned. What are the chances of finding a young pair fresh into love here? What if I had a company? I feel funny that I thought that some company would think of something wild here (that even in thoughts, it is not me who does this part of having wild thoughts, even when the thought of having company and the thought of the companion thinking wild is my construction). Would it be an early morning, or a really late night for them? Anyhow, I don't stop myself from thinking - it only constipates the mind. This thought too, fades.

I see more people coming in from the other end of the park as I reach there - mostly men. So far, I have seen probably 2 middle-aged women in the park. These people walk their circuit in the opposite direction. I complete one round - 5:54am. Let's run another lap and go home, I decide. This time, there are a few more women in the crowd. 3 young women had entered the park from the other gate - talking cheerily while I was passing the gate. The one in the middle was wearing a knee-length or shorter skirt. It is still a bit cold though, isn't she feeling cold. I wonder if they'd make it to the other side of the park where my lap ended by the time I reached there. Are women late (or are men early) because dark might be unsafe, or because women are tending to their morning house chores? The thought fades as I approach a steep ascent ahead. Funnily, I feel like speeding up and moving my legs faster here and also risk falling face first due to the sense of imbalance it is putting in me. But I survive it - a faster clip and I can almost feel my heart pump faster (but the real feeling of heaviness would come later when I walk up a gentler slope on my way home). My thighs pull a little higher to climb up (I realize) which gave that feeling of moving faster. On the top of the climb, I am panting and having a thought of walking from here on. "I will run till the end of the lap without stopping", I tell myself. The lap ends at around 6:04. The ladies haven't made it this far. I move into the trail again to see if I can find an empty suspended bar to hang around. There is one 'S' shaped overhang which I can reach without much effort. I try to move across the overhang, bar after bar, hanging. The bars are cold and the iron hard on my skin. Plus, I realize that the activity itself is a bit hard. I don't want to swing in and out as I catch the next bar with the other hand while moving forward, but move steadily instead.

I start for home by 6:04. This means that the previous timing was incorrect. It's not dark anymore now and I watch the street lights on the highway shut down in unison as the world gets brighter every minute. Way back is a gentle climb and I run a part of it - from the Raien Basera till the cremation grounds. My head does a mental backflip. "I will run up to the cremation grounds", though meant as a milestone makes me backtrack a bit. "Zindagi marghat tak ek daud hai" (life is but a race to the crematorium). That's why. "I'll run to the temple", I tell myself. No good mixing the physical with the meta. I eventually run till the signboard marking the entrance to the cremation grounds. From there, I walk briskly towards home. 6:24am. 6600 steps. Good enough.

While returning, I notice that milk has arrived at the shop I buy milk from. I make a mental note to carry money and fetch milk while returning from the jog rather than come back later when it the world gets more dusty. "But notes will get wet due to sweat", I counter myself. I return home, take a bath and get ready to work for an hour by 7. But before that, I fetch milk and boil some tea.

Tea without sugar is funny business. I get no taste when it is piping hot. So, I let it cool down a bit. I used toned milk, so there is no natural sweetness to the milk that cream yields. But with a warm tea, I can feel the taste of tea hitting my tongue. It's good, to be able to find the taste. Hot tea doesn't give that.

I had breakfast by 8:15. It has been an hour of writing as of now, and I am also past my post-prandial daze that usually sets in around the one hour mark. So far so good.